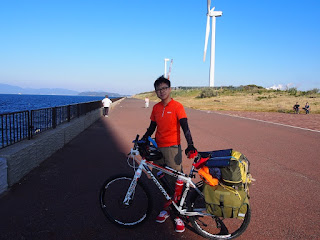 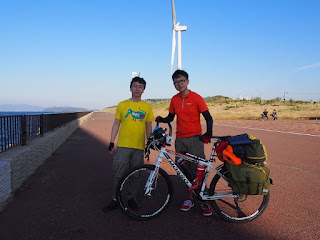 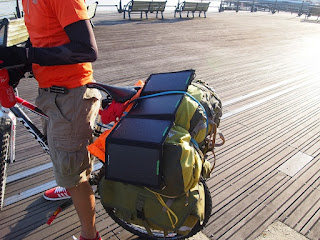 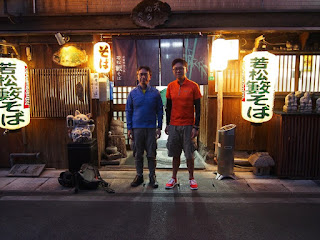 He has a plan to travel Japan by his bike until Nov.1st. He said that his last destination is Kobe（神戸）  We met at "Kampo no Yado Kitakyushu"（かんぽの宿北九州） at about 2 pm. After our visit to wind powered generation systems in Hibikinada landfill area（響灘埋立地）, we went to Wakamatsu civic hall（若松市民会館） to apply for a campsite named "Shoubu-dani Campsite"（菖蒲谷キャンプ場） where he stayed at the day. After that, we had a dinner at a restaurant named "Yabu-Soba"（藪そば）.

He said that he works for an IT company and he made a plan to visit Japan now because of having his first baby in this December. I was interested in his solar panel that he is bringing with his bike. He said that it is very useful because many campsites has no electricity. He needs electricity to use his smartphone.

After the dinner he used a ”sento”（銭湯）to clean up his body and I took him to the campsite,

We had enjoyable time under very good weather. 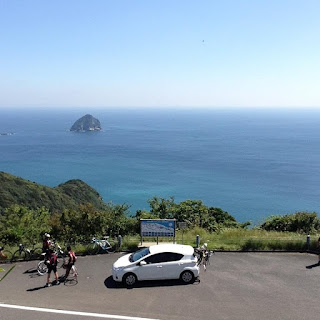 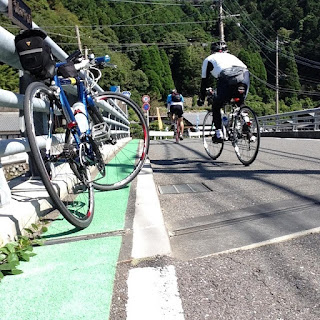 I took part in a cycle event called "Tour de Saiki" on Sep. 20th. It was my second participation to the event after 2013. At that time, I fell down from my bike and injured on my left shoulder.

I entered 102 km course and finished it in about eight hours. The last part of the course included steep slopes to a lighthouse, so I walked with my bike for about one hour.

I stayed at an accommodation run by a fisherman at the night with my friend. Next day, we traced the course by my car.

The first photo is a scenery from the high place on the course. The second is a place where I felt down and injured on my shoulder.


"Kurosaki" area in Yahata-nishi ward in Kitakyushu is my home town. However, there have not been  a good news in this area  for a long time because the area's population has been decreasing and a lot businesses had closed. But, now I can present a good news about my home town.

"YASKAWA" is a manufacturing company that is famous for building industry robots and has its headquarter in "Kurosaki" area. Recently, "YASKAWA" has opened a robot museum near the JR "Kurosaki"station and has exhibited its "O-mikuji" robot at the station's entrance area. Today I saw its working and felt a little bit proud of being born in "Kurosaki".

After my mother's death 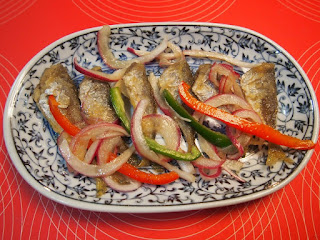 My mother passed away on June 6th. I had been in mourn mourning for her death and away from writing this blog in recent days, but now I I've returned.

Last Sunday, I went fishing at a fisherman's port to catch small fishes named "aji". I caught a good amount of "aji" and I cooked them for that day's dinner dish. It is named "Nanban-zuke". 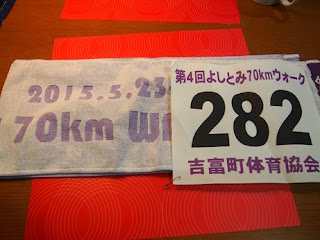 If I take part in this event againg next year, I would have enough training for the event. 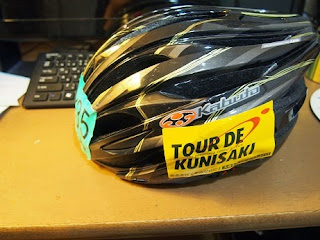 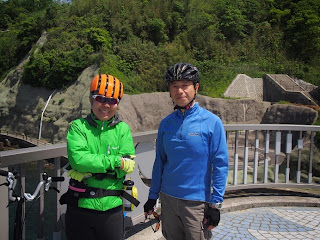 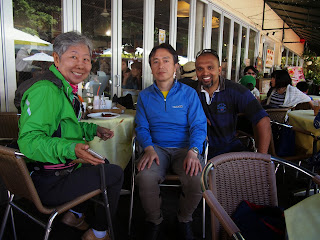 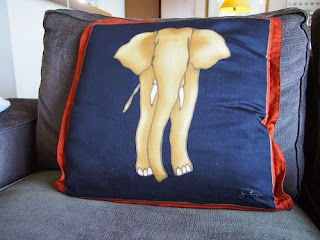 
On May 9, I went to fishing to the river mouth of Onga-gawa. I would give two fishes that I caught to a big heron. But the second one was stolen by a kite before the heron. It is just a Japanese saying "Tonbi ni Abura-age wo Sarawareru"（トンビに油揚げをさらわれる）.

I had been thinking that I had already seen these background in this movie. But later I found that it was taken in Kokura, Kitakyushu city for which I have worked as a local government employee.

This is a very interesting video, I think. 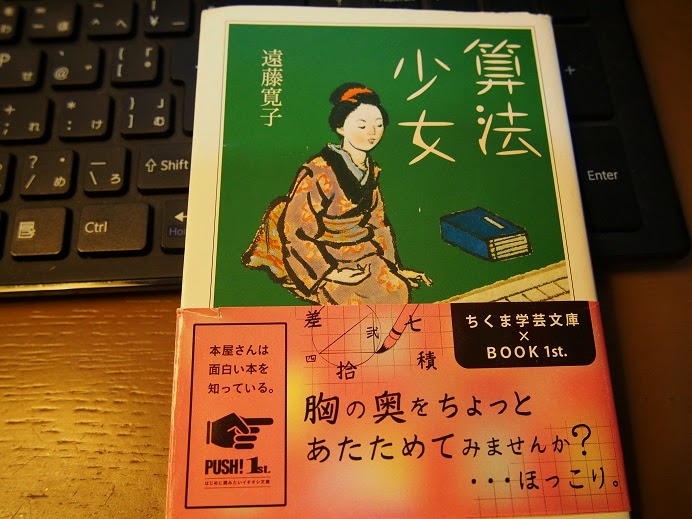 I have just finished a book called "Sanpou-Shoujyo"（算法少女）. "Sanpou" means mathematics and "Syoujyo" means a girl. This is an interesting story, I think. There is a same name's book that was written in Edo era. But, no one knows the name of its author. This story is a fiction that is about a girl who writes "Sanpou-Shoujyo".

In Edo era, the unique mathematics（和算） that is developed in Japan was popular among ordinary people. They enjoyed it as a kind of hobby.

The book includes people's custom in those days and tells atmosphere of people's life.

The main target reader is younger adult, but many people can enjoy it. I recommend you to read it.
投稿者 bikenglish 時刻: 7:34 PM 3 comments: 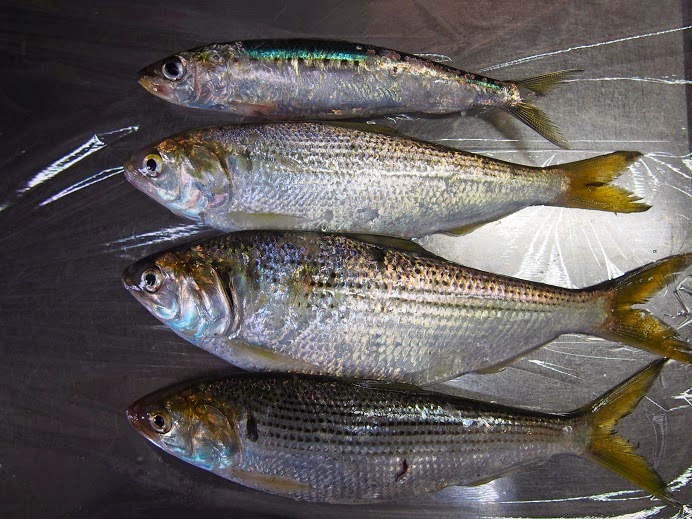 In the past, fisherman in Japan could catch a lot of sardine and it was very popular fish among ordinary people. But now it is not easy for people to catch it in their neighborhood.

I have heard that people can recently catch it in Onga-gawa river's mouth. So I tried to catch it last Saturday.

Finally I caught only one sardine but I was satisfied about the result because I got it for the first time in more than 20 years.

At the same time, I caught three gizzard shads.

I cooked the sardine for "sashimi" and the gizzard shads for "nanban-zuke". 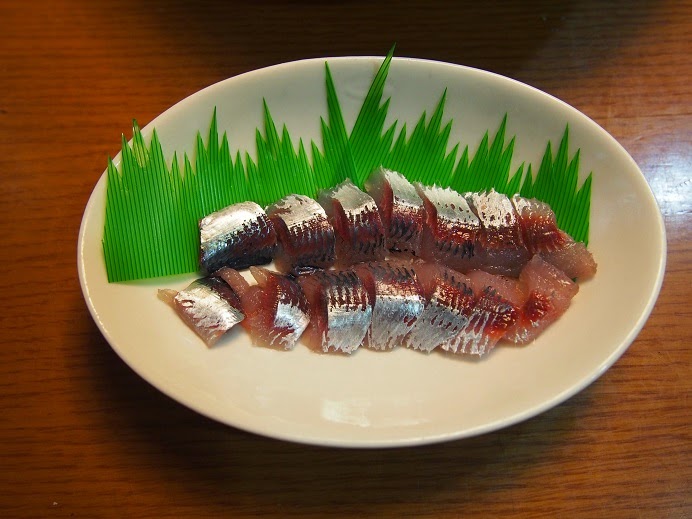 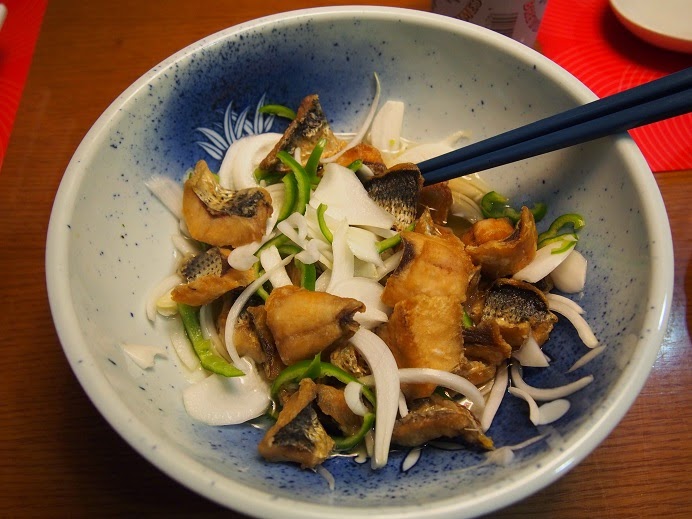 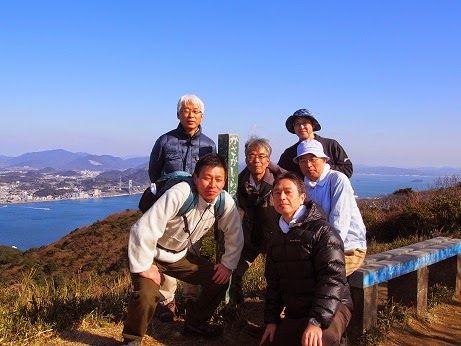 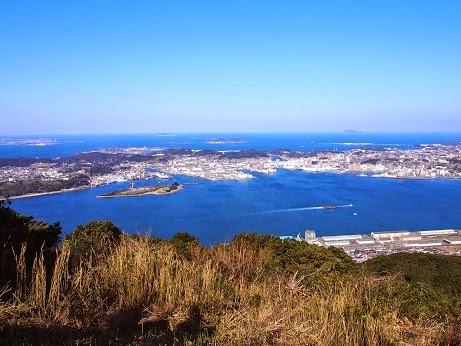 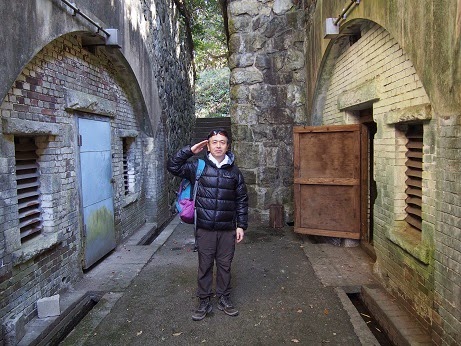 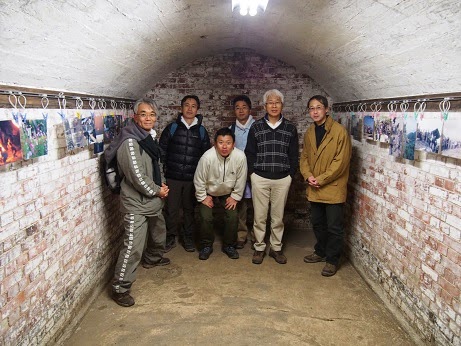 Today, I climbed Mt.Kazashi（風師山） and Mt.Yahazu（矢筈山） in Moji ward（門司区） with my friends.They are not so high mountains, but we enjoyed walking in mountain area because of good weather.

We saw the good view of Kanmon channel（関門海峡） from Mt. Kazashi. And we visited the former military's buildings on the top of Mt. Yahazu. We saw the former cannon sites and ammuntion depot. They were built in Meiji era for preparing for the attacks from China. We were surprised that there are these building on the top of mountain.

A friend on the Internet has become my reaｌl friend 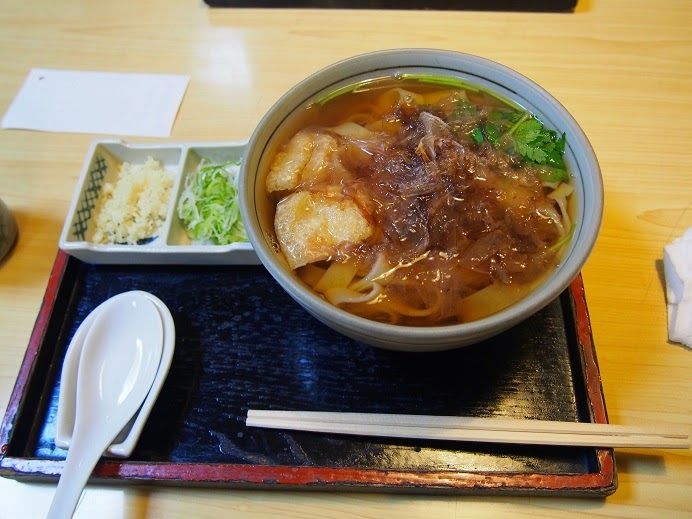 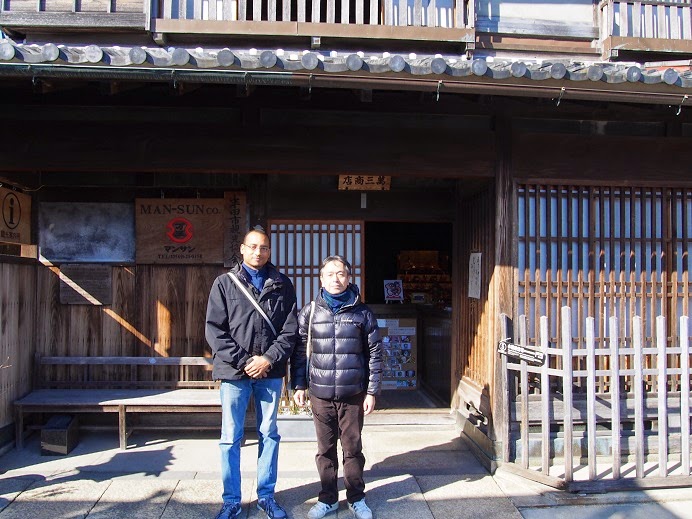 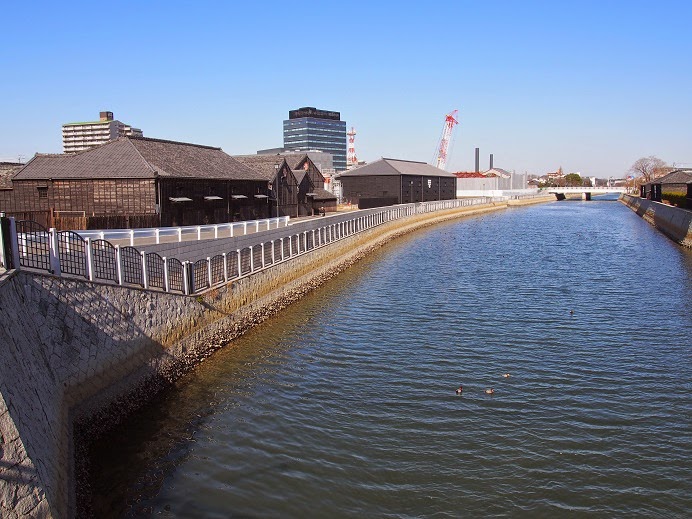 Last weekend I visited Nogoya（名古屋） city, Aichi prefecture. My main purpose was to meet with a friend. He is an American who is studying Japanese language in Japan. We have corresponded for about seven years on the Internet but had not yet met each other directly. So it was the first time for us to have a meeting.

We enjoyed conversation mainly in Japanese during Saturday's dinner and next day's sight-seeing in Handa（半田） city. We visited an old sake brewery and its neighborhood. It was a very fine day.

We ate "Kisimen"（きしめん） that is a representative food of this area. It was very good.


Regina Carter who is African-American Jazz violinist in USA is one of my favorite musicians. I bought her latest album, "Southern Comfort" about two month ago and I am often listening to it, it is very good.

Her 2012 album, "Reverse Thread"'s theme is about "African music" and this album is about her family history and about the music that her grandfather might hear in his generation. 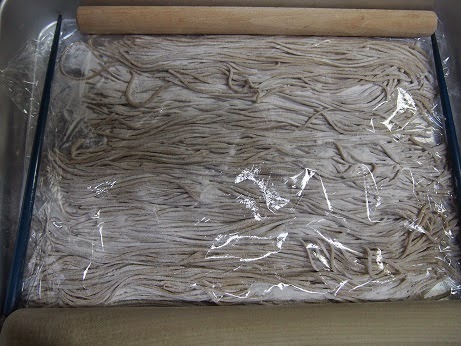 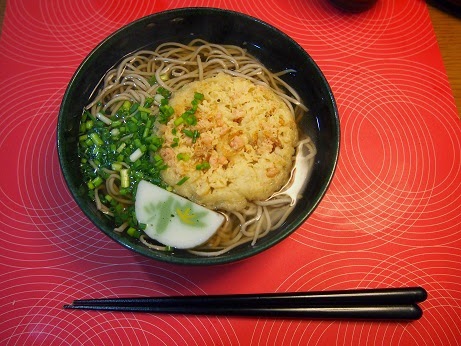 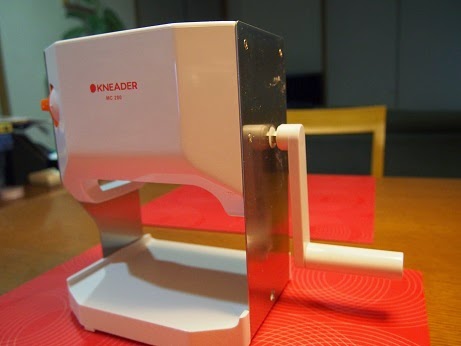 There is a custom in Japan of eating "soba", Japanese buckwheat noodles  on December 31. It is called "toshi-koshi soba". Most people buy it and eat in their house or eat it at a restaurant, but I tried homemade soba on that day.

The first photo is the noodles before boiled. The second is the finished dish. The third is a pasta machine to make it.