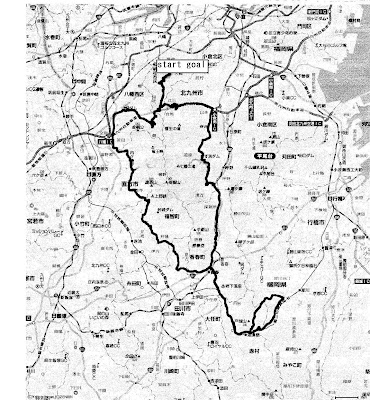 P8220084, originally uploaded by bikenglish.
Last Sunday, I took part in a bike touring that was formed from 9 members. Only one of them was my acquaintance in them. He had suggested me to take part in it and I decided to do it.

Usually, I ride my bike alone along coast line without up-down. So, this riding was very hard for me because it included many slopes in very hot weather. The distance was about 100Km. We started at 8AM and came back at 4PM.(Of course, it includes several rest.)

I managed to keep up with them at the end all time. But, this was good experience that tell me a joy of group riding. And "mini-puffet"（ミニパフェ） ,"Ringo-curry"（りんごカレー） that I ate at a farmer's restaurant were very delicious.
投稿者 bikenglish 時刻: 10:04 PM 1 comment: People in Japan believe that spirits of ancestors return to the living world in a period known as "O-Bon"（お盆）, from August 13 to 15. And people celebrate the first "O-Bon" that comes after their loved people died. It is called "Hatsu-Bon"（初盆）

The period of last Friday to Sunday was "Hatsu-Bon" for us because my father died this January. Around "Butsudan"（仏壇） was decorated with special ornaments in my mother's house.

Several people, mainly relatives, visited my mother's house to pray for the spirit of my father in front of the Butsudan.

Until my father's death, "O-Bon" was a good time for my family to gather, eat and drink. But, now, this has become a little bit lonely time because of the lack of our family member. IMG_0521.JPG, originally uploaded by bikenglish.
Yesterday, I guided an Australian man who sent a message through Japan Cycling Navigator in the city of Fukuoka. He says that he will stay in Japan for about 2 months.

At first, we visited the Kushida Shrine（櫛田神社） in Hakata ward（博多区）. It is a famous shrine because the Hakata Yamagasa（博多山笠） is held around the shrine each year. But, unfortunately, the building is smaller than I expected and dons not has great atmosphere.

Next, we visited the Fukuoka Jyo-shi（福岡城址） and the Oohori-kouen（大濠公園）. The sky was clear, but air was very hot.

After that, we ate Nagahama-ramen（長浜ラーメン） as earlier lunch. Also, unfortunately, it was not so delicious as well as I ate in the past.

And, we went to the highest place in the Fukuoka Tower（福岡タワー） to see the city.

Our last visit was a shop that sells bike goods because he needed some items for his this touring by bike.

He will leave Fukuoka for Beppu（別府） early morning on August 7. Using a map, I gave some advices to him about the route that he will use for his way to Beppu at his accommodation before I said "good-bye" to him.

I really hope his secure and enjoyable touring by bike in Japan.
投稿者 bikenglish 時刻: 6:47 AM 2 comments: 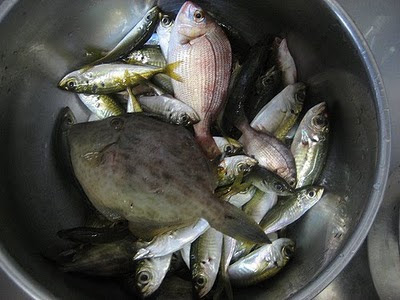 Last Thursday, I went fishing in the sea. This is the day' s result. I made "Nanban-zuke"（南蛮漬け）, one of Japanese traditional dishes, from them.
投稿者 bikenglish 時刻: 9:16 PM 2 comments: