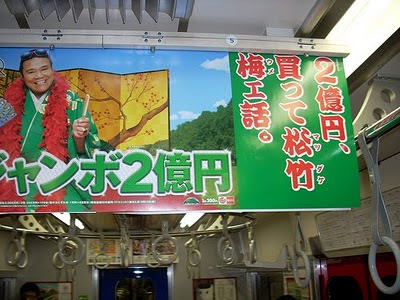 This is an advertisement of a lottery that I saw in a train. This time, I try to explain it.

Normally, we write it as "「二億円 勝手待つだけ うめぇ話」（In my translation, "(The first prize is) Two hundred million yen. It is only "buying it and waiting (for the result) for you to do. It is a very good chance for you because you can get it without any other efforts."

It is a kind of "word play". We often use 「松竹梅」 as a sign of celebration. So, the writer use them to make the copy more interesting.
投稿者 bikenglish 時刻: 7:38 PM 3 comments: 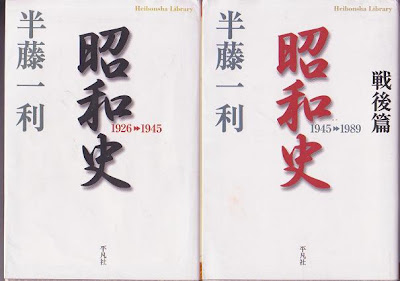 "Why did Japan start the war, the Pacific War, without considering the end of it or the way to end it?". I have been interested in this question in a few years. This theme has many comprehensive things, and probably, no one, even in Japan could explain it correctly, I think.

"Shouwa-shi"s （昭和史） written by Hanfuji Kazutoshi（半藤一利） are good texts for considering about it. These are written in easy expression and has taught me a lot of things that I had never known.

Most Japanese (including me in the past) have thought that Japan had invaded other Asian countries in not humanitarian way, and this invasion led to the war. Of course, it is partly correct, but the belief has stood at very one side. I had thought what caused this simple, superficial thought in Japanese.

I found an interesting fact that is likely to link to this belief in the books.

According to the books, the GHQ used two media to educate Japanese. The first was "Taiheiyou-sensou-shi"（太平洋戦争史）"the history of the Pacific War". It appeared in Japanese newspapers in December of 1945 and described that Japanese army invaded the Asian countries in very cruel way.

The second was "shinsou-wa-kouda"「真相はこうだ！」(in my direct translation, "the fact was like this!"). It was a radio program that started also in December of 1945 and also told the cruelty of the Japanese military. Those included "the Death March of Bataan" and "the Nanking Massacre".

The GHQ or America had succeeded in educating Japanese people who were very shocked with the defeat of the war, I think. 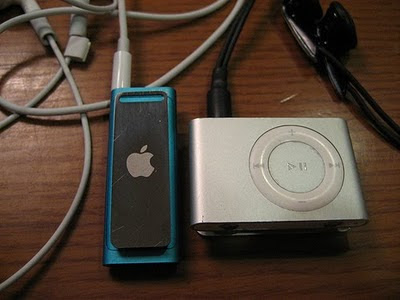 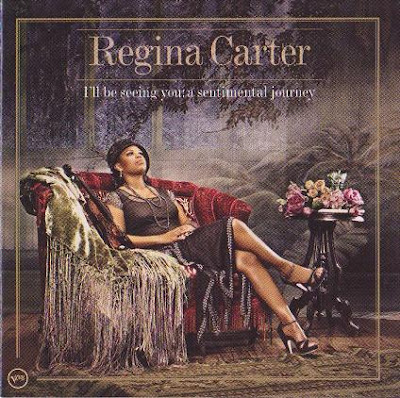 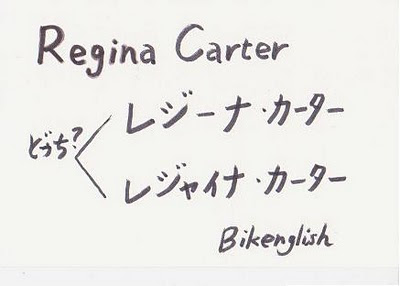 I lost an i-Pod shuffle that I used for about 2years in the end of December last year. So I bought a new i-pod shuffle earlier January. My main use of it is to listen to the VOA Special English programs taken from its podcast in a train on my way to my office.

The new i-Pod shuffle has a convenient function that speaks the title of music or program. But, it does not have a basic function that plays a song a little bit forward or back.

But, I found the old one in my jacket last week. I had forgotten that I kept it in my cloth, probably because I spent busy time for nursing my father.

The second purchase in recent days is Regina Carter's album;"I will be seeing you:a sentimental journey". She is an African-American jazz violinist, and one of my favorite musicians. I have heard her name and music through VOA Special English program.

By the way, the new i-Pod shuffle's new function brought me a small finding. I had thought that her first name is pronounced "REJINA" for a long time, but it sounds "REJAINA" to me in its speaking function. I don't know which is correct.
投稿者 bikenglish 時刻: 6:47 PM 7 comments: