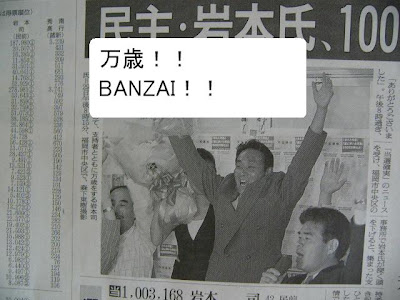 Now, I feel a little bit tired, because I worked for a temporary work at late night for this election. But, I got several money for this work, Now, I am a temporary rich man. (懐が暖かい)

By the way, if you watched some TV programs about this election in Japan, you might see that winners did "Banzai". "Banzai" is a Japanese unique expression that shows their win, success, configuration, happiness etc. in especially groups. Its three times repeats is called "Banzai san-syou"(万歳三唱). You can see it in several sceneｓ like athletic meets, weddings and parties. I am not sure, but probably, there is a same expression in Korea .(or China?) But they pronounce "man-sei!!".

During World War Two, people did "Banzai san-syou" when they sent a soldier to fighting areas.
It is a little bit unpleasant and sad history.

I want to know whether Americans have similar expressions like "Banzai" And I want to see Hillary or Obama doing "Banzai" in November of 2008!!
投稿者 bikenglish 時刻: 9:24 AM 6 comments: 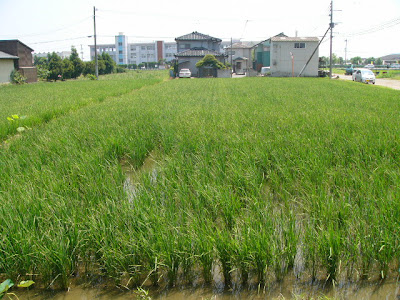 In my area, fine days have continued since the weather forecast declared the end of rainy season on July 24.(We call it "tsuyu-ake sengen".) The temperature is very hot, more than 30 degrees celsius! 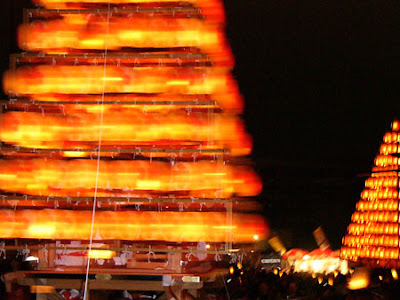 "Tobata oo yamagasa"(Tobata chochin yamagasa) festival is being held in Tobata ward in Kitakyushu city from today to Sunday(Now, I am working there). In Fukuoka prefecture, "Hakata yamagasa" is very famous, but "Tobata oo yamagasa" is also very amazing, I think. It uses a lot of "chochin" in the night, so it looks very fantastic. If you have a chance to visit the nothern part of Kyushu in this season, I recommend you to see it. But, unfortunately, I cannot see this festival at this time because I have to do a temporary work for this election on Saturday and Sunday.
"Tobata oo yamagasa"=「戸畑大山笠」
"Tobata chohine yamagasa"=「戸畑提灯山笠」
"Hakata yamagasa"=「博多山笠」
投稿者 bikenglish 時刻: 7:20 PM No comments: 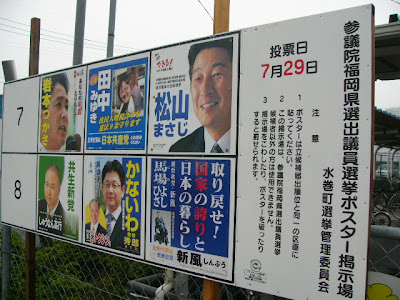 On next Sunday, the election of members of the House of Councilors will be held in all areas in Japan. I don't have lots of political interest, but I predict the collapse of Abe administration would happen.

This panel is placed at the station that I use for my work.
「参議院議員選挙」（さんぎいんぎいんせんきょ）
投稿者 bikenglish 時刻: 8:37 AM No comments: 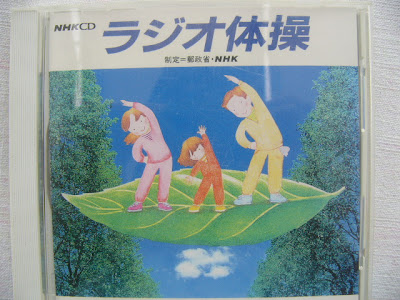 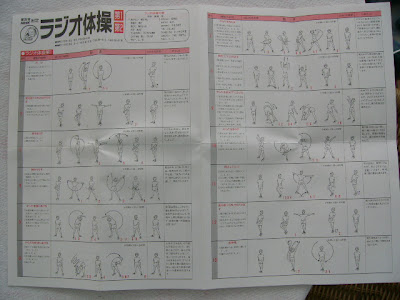 In this summer, I have to supervise "Rajio Taisou" event in my area. Almost all Japanese know it, and can exercise it. Because we, almost Japanese, people learned it during elementary school for six years. Do you know it?
投稿者 bikenglish 時刻: 8:28 AM 6 comments: 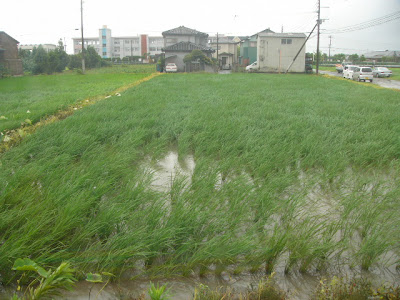 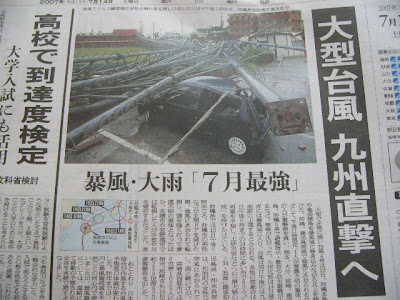 A big typhoon strikes our area "Kyushu", so, today, we cannot go outside home. The weather forecast says the peak of strong wind will be at 6pm in Fukuoka area. This typhoon will go to "Shikoku", "Tuubu" and "Kanto". But now, at 5:30 it is not so terrible than thought.
「大型台風九州直撃へ」"oogata taifu"(a big typhoon)"Kyushu chokugeki e"(direct attack to Kyushu)
「暴風・大雨「7月最強」」"boufu ooame"(strong wind and terrible rain)"hiti-gatsu saikyo"(the biggest in July in history)
投稿者 bikenglish 時刻: 5:20 PM 2 comments: 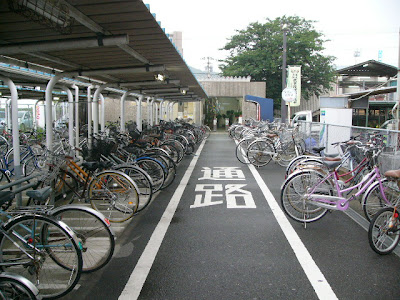 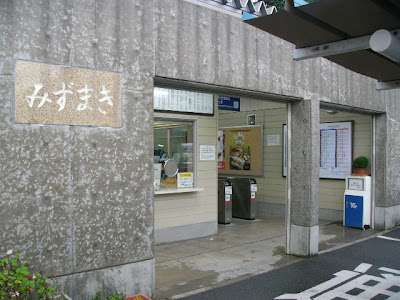 I use this small JR station from Monday to Friday for my work. You can find a lot of bikes called "mamachari". Many Japanese people use these "mamachari"s for a short trip like going to a super market or a station from their home. Almost "mamachari" cost 5000yen to 10000yen, so not expensive.(but my family including me do not have "mamachari").
投稿者 bikenglish 時刻: 6:28 PM No comments: 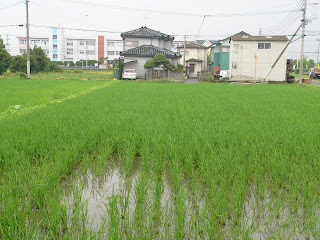 This "tanbo (a rice field)"is located on the southern side of my house. Of course , it is not mine, belongs to a farmer who lives neighborhood.
In this photo, you can find a junior high school where my son goes.
It does not rain, but it is cloudy and the air has a lot of humidity.
投稿者 bikenglish 時刻: 8:59 AM 2 comments:

I start this blog to show Japanese scenery for my foreign friends by placing photo.
投稿者 bikenglish 時刻: 11:43 PM No comments: