By the way, this "Fujimaru"'s animation is a very good work, I think. The creator uses "light and shadow" very well.

Sometimes, I see "Naruto" animation on TV with my daughter and I am often impressed with its high quality. But, "Fujimaru" has a high quality, even though it was cerated more than 40 year ago.

I would like to know about how you feel from this animation.
投稿者 bikenglish 時刻: 8:43 AM 3 comments: 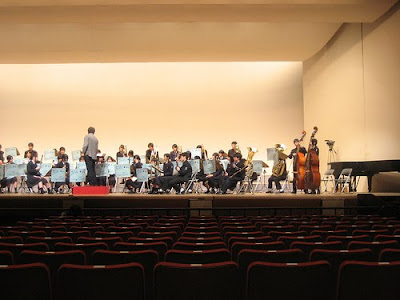 My son belongs to a wind music club of his high school. Last Sunday, I went to the club's annual concert with my wife, daughter and mother-in-law.

The concert was formed by two parts, the first was classic stage, and the second pop stage. I could enjoy all the stages, especially the pop stage.

The pop stage included a dance performance by some members of the club. They danced with the melody of Michel Jackson's "ABC" and "Thriller".

I was a little bit surprised with their trained performance because their school is one of a "Shingakkou"(進学校) in Fukuoka prefecture. "Shingakkou" means in Japanese that its students study very hard to go to famous universities.

It was the best thing for all parents attending the concert to see their children's full smiles after the concert, I think.
(This photo is one of scenes in their rehearsal.)
投稿者 bikenglish 時刻: 7:08 PM 3 comments: 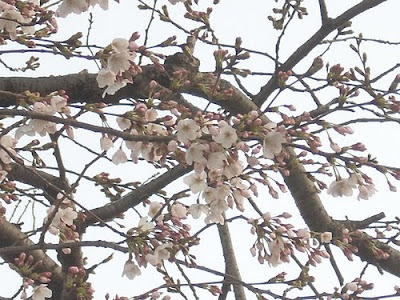 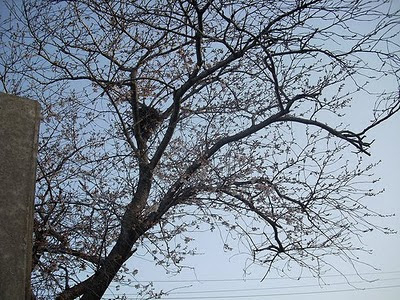 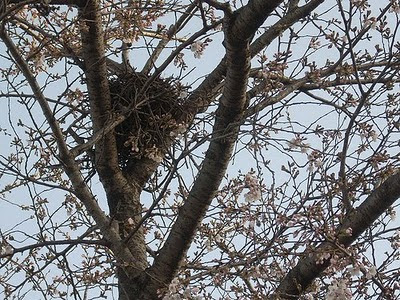 Last Wednesday, I found a cherry tree in a station beginning to blossom on my way to my office. I could feel the coming of Spring by it. And, I also discovered a nest of a bird in the tree. This small event brought a little bit happier feeling to me.
投稿者 bikenglish 時刻: 7:08 PM 3 comments:

There are a lot of elder females in Japan who have problem on their knees. It is "knee osteoarthritis", "henkei-sei-shistu-kansetsu-shou"（変形性膝関節症）in Japanese. My mother is one of them.

She developed this problem about 4 years ago. The pain on her right knee had grown day by day and finally she could not walk smoothly. About three months of nursing my father might make her condition worse.

I had recommended her to see a doctor in a relatively big hospital and receive an advice about an operation to replace her knee with an"artificial joint" but she didn't. But she decided to go to a hospital when she felt a strong pain in her knee in the middle of February.

The doctor explained her that Total Knee Arthroplasty ( TKA ) is the most effective way to get rid of her pain, and she agreed. Now, she is in the hospital (ironical speaking, it is where my father died!) and will receive the operation next week. I really hope her success in the operation.
投稿者 bikenglish 時刻: 9:33 AM 4 comments: 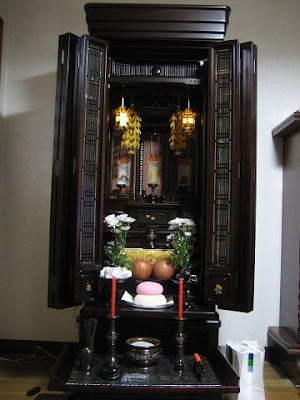 Last Saturday, my mother, brother and I held "Shijyu-ku-nichi" in a temple and about twenty relatives attended it to pray for my father's happy life in Heaven.

I have no religion, I had never understood the meaning of this kind of ceremony. But, I could first understand the existence of it after I experienced my father' s death. In my thought, these kind of religious ceremonies are held to ease unbearable sadness of people who have lost their loved ones. In other words, people have established this wise way to forget the sadness through a long period on time. Now, I can recognize the importance of these things.

The 2 days before "Shijyu-ku-nichi", a "Butsudan"（仏壇） has been placed in my mother's house. In (Japanese) Buddhism, believers say that a person become "Hotoke-sama"（仏様） after his death. And they pray for "Hotoke-sama" before "Butsudan".

Do you think how much "Butsudan" is? The price may surprize you very much, I think.
投稿者 bikenglish 時刻: 9:02 AM 4 comments:

I have learned about a heated dispute in the United States about the health care reform through the VOA Special English program. I am very interested in how Americans could settle this difficult problem.

But, I could not understand the following sentence in the VOA's program. "The Republicans propose taking smaller steps to reform the health care system. Their ideas include permitting Americans to shop for health insurance in other states and expanding health care savings accounts."

People who are insured by health insurance can receive medical treatment at all hospital in Japan. I would like to know what is meant by this part, "permitting Americans to shop for health insurance in other states and expanding health care savings accounts".
投稿者 bikenglish 時刻: 8:11 PM 3 comments: