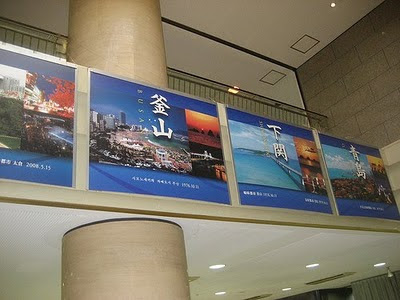 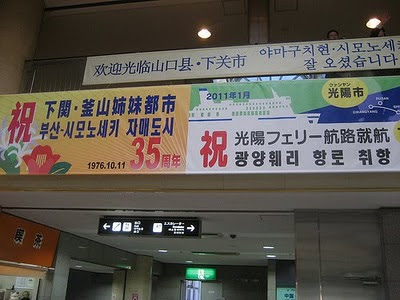 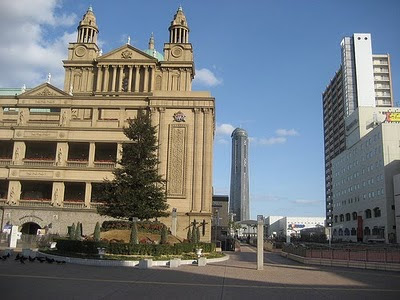 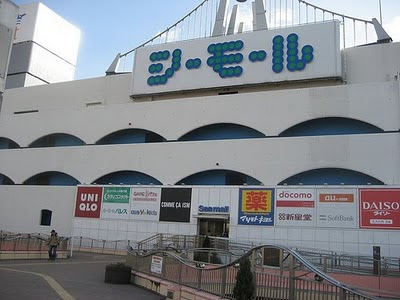 Last Thursday, I went to the city of "Shimonoseki"（下関） in my business. The city locates in the western edge of the Honshu（本州） island and belongs to Yamaguchi（山口） prefecture. It is also a historical city and has many sight seeing places.

It took about half an hour from my office, so the city locates in near area. However, it is rare for me to go there except for special events.
投稿者 bikenglish 時刻: 10:46 AM 2 comments:

Every day morning, on my way to work place I listen to the news program on VOA Special English downloaded on my i-Pod shuffle. But, VOA does not offer any scripts of the News on its web-site. Now, I will try to dictate it on this blog to brush up my English. And also I will try to translate it into Japanese.
(If you find my mistake in the script, please tell me correct words.)
"The temporary cabinet of the government in Tunisia says it will recognize political parties that have been banned. It will also agree to pardon to political prisoners. Officials announced their decisions Thursday after the cabinet held its first meeting since the ouster of president Zine el-Abidine Ben Ali. The cabinet also said they there would be three days of mourning begining beginning Friday for victimes victims of the unrest that forced Mr. Abidine to flee."
チュニジア政府の暫定内閣は、これまで禁止されていた政党を認めること、政治犯に恩赦を与えることを発表した。政府関係者は、木曜日、ザイン・エル・アビディン・ベン・アリ大統領の追放後初めて開かれた内閣の会議の後、彼らの決定を発表した。また、内閣は、アビディン大統領を追いやった紛争の被害者のため、3日間喪に服することも発表した。
投稿者 bikenglish 時刻: 8:55 PM 3 comments:

Recently, there have been heartwarming news in Japan that is called "Tiger Mask" movement.（タイガーマスク運動） In the end of December of last year, a man who called himself "Date Naoto"（伊達直人） gave "randoseru"（ランドセル）, small school backpacks to children living in orphanage. Several days later, another "Date Naoto" appeared in another place and left several gifts to an orphanage. And also third "Date Naoto" appeared in a different place. Finally, these kind of donations have been over one thousand.
"Date Naoto" is a main character of an animation movie named "Tiger Mask" in the 1970's.(Its original is a comic.) In the story, "Tiger-Mask" is a masked professional wrestler and no one knows that he is "Date Naoto". "Date Naoto" donates several gifts using the name of "Tiger-Mask" to an orphanage where he grew up.
When I was considering this movement, a spiteful idea appeared in my mind. If the first donor used the name "Kan Naoto"（菅直人）, the Japanese prime minister, how much the movement might have spread?
Many people say that the animation's ending song is one of the saddest songs in Japanese animation movies.
投稿者 bikenglish 時刻: 7:08 PM 2 comments: 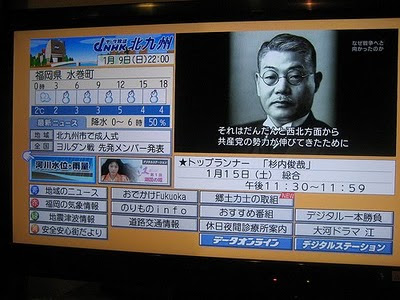 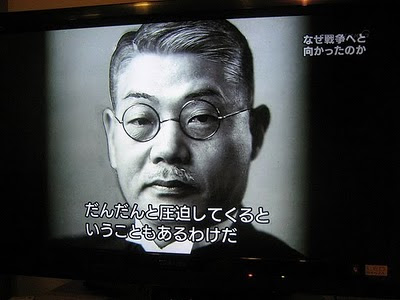 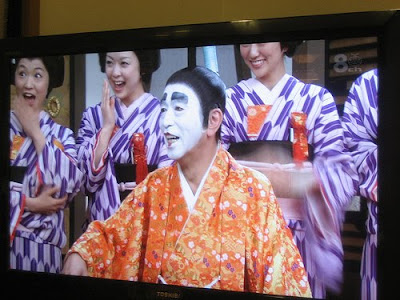 "Chi-Deji-ka"（地デジ化） is an abbreviated form of "Chijyou-Digital-Housou-ka"（地上デジタル放送化） that means "analogue broadcast will fully switch over to digital broadcast by July 2011. But, for most people including me, it means that people in Japan buy the latest TV set that receives "digital broadcasting".

The 37" TV set is a product of Toshiba and its price was 128,000 yen. I felt that it is a little bit expensive but I have been satisfied with its beautiful picture and its monitor size.
投稿者 bikenglish 時刻: 7:25 PM 1 comment: 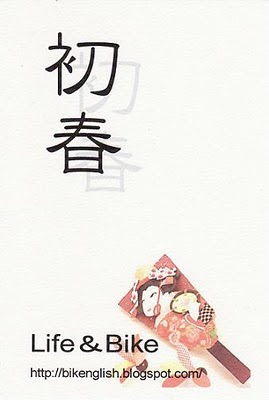 In Japanese custom, people exchange new year message card called "Nenga-jyou" （年賀状） between close members on January 1st. But, people who lost their close family member do not send "Nenga-jyou", instead, they send "Mochu-hagaki" （喪中はがき） in the first of December.

But, I did not follow this custom because it passed about one year from my father's death and I won't let my friends to know my father's death in this kind of style. So, this year, I decided to send a simple "Nenga-jyo" to friend who sent it to me on January 1st.
投稿者 bikenglish 時刻: 4:16 PM 2 comments: