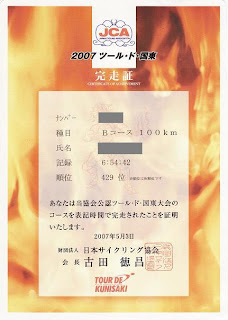 I took part in an bike ride event named "Tour de Kunisaki" last year. This is a certificate of achievement at that time.

This event is held each year in Ooita prefecture on May third, and I will take part in it this year.

It took 6hours 54minute 42seconds for me to ride on a distance of 100km. It includes short time rests and lunch time. This time, I would like to run faster than last year's record.

Japanese manners have dropped to … 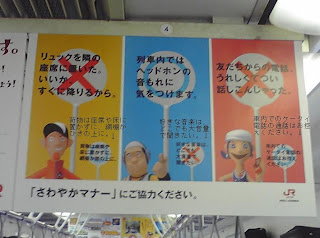 This poster is put in a train that I use for going to my office. I felt that Japanese people's manner have dropped to the bottom of the ground when I saw it for the first time.

These sayings look me as "Atarimae"（当たり前）that means common sense that everybody knows. But, JR stuffs have to teach people them. Why?

I often see high-school students sitting on the floor in a train. Now is the time when we have to teach younger people about basically simple social rule.
投稿者 bikenglish 時刻: 1:06 PM 4 comments: 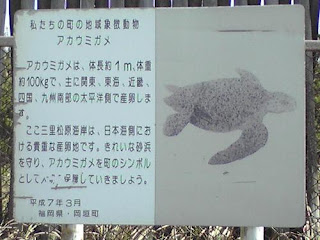 I found this sign on my home course for bike ride last Sunday. It says that here is a place where sea turtles lay their eggs.

But, it is very rare, so most of people including me have not had a chance to see it.
投稿者 bikenglish 時刻: 9:11 PM 1 comment: 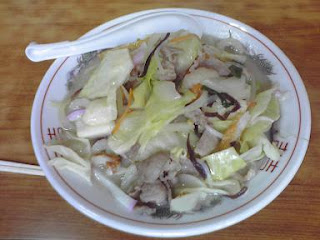 This is a kind of a noodle named "Champon"（チャンポン）. It is formed of comparatively thin noodle, pig-bone based soup and many sliced vegetables.

It is a popular food in Kyushu area, especially Nagasaki prefecture.(It is difficult to find it in other area.) 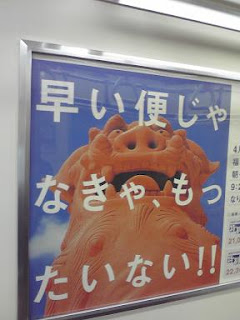 When I saw this poster in a subway in the city of Fukuoka, I laughed a little bit. Because there are two meanings in the term, "便".

This poster is a advertisement of an air line company in Japan named ANA and shows that a user can save money by making a reservation for an earlier flight. So, in this context. we should say it "bin", not "ben.

In direct translation, "If you do not use an earlier flight, you would lose your money".

If you say it "ben" in this context, this phrase has no sense. (but, it is funny.)

"Hershey made in China" 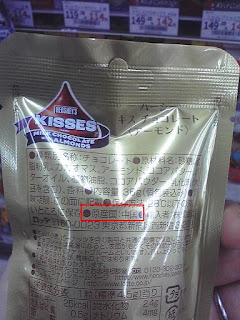 I have already learned that the Hershey is closing its factories in the United States and building them in other country like Mexico. But, I didn't know that its products are being made in China, now. I was a little bit surprised because I thought that the Hershey was a representative company of America.
投稿者 bikenglish 時刻: 9:52 PM 2 comments:

There is a Sakura tree in JR station that I use for going my office. This time, I took a series of its photos from "Sakura saku"（桜咲く） to "Sakura chiru"（桜散る） by using my cell phone with degital camera. These photos were taken from one point on different days. I think that you can enjoy them. 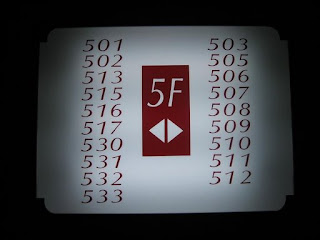 This is a room-number plate in a traditional hotel where I stayed with my parents last month.It does not include number 504, and 514. Why?

It is a kind of "triskaidekaphobia". (I have learned this word through the VOA.)

Number 4 is pronounced "shi(or yon)"（四）in Japanese, so people in ancient days had a tendency to link 4 to death that is also pronounced "shi"（死） in Japanese. In other words, 4 means "death" to them. So, still now, some traditional hotels and old hospitals in japan do not have rooms numbers end in number 4.

Of course, modern people do not mind it at all.
投稿者 bikenglish 時刻: 6:30 PM 7 comments:

Last weekend, I had a one night trip in Kyushu area with my family. I took a paid holiday on Friday for this trip. The first day, we went to the Dazaifu-tenmangu（太宰府天満宮）. It is a historical shrine that honors "Sugawara-no-Mchizane"（菅原道真） who was an official and poet in the Heian-era. He is also known as the God of study. Many students in Japan go to this shrine for praying their successes in their shool-life.

My son will take an entrance examination for a high school in next March, so we prayed for his success.

After praying, we were surrounded with a strange atmosphere when we ate Dazaifu's famous snacks called "Umegae-mochi"（梅ヶ枝餅） at a shop. Because, there were several Korean vistors, and they talked each other in Korean language loudly. Recently, the number of Koreans who visit Kyushu increases very much. This is reason why the closeness of Kyushu from Korea and the rise of Korean people's income.

After that, we visited "Kyushu National Museuem" that held "Kokuhou-Dai-Emaki-ten".

Our accommodation on that day was in the city of Beppu（別府）, Oita prefecture. It takes about two hours to go to Beppu from Dazaifu by using expressways.

The next day, we went to an old amusement park called "Rakutenchi"（楽天地）. It is very old because I went there during my primary school's trip about over thirty years ago.

I place several photos on my album on the web. This time, unfotunately, I could not take typical onsen's photos in Beppu where is very famaous for a lot of onsen. If I go to Beppu in near future, I would like to take onsen photos.