Japan has agreed to help support Indian's money, the rupee. Japanese Prime Minister Yoshihiko Noda agreed to an exchange of 15 billion dollars of currency with India during a visit to New Delhi on Wednesday. Indian money has been losing its exchange value recently. Mr. Noda and Indian Prime Minister Manmohan Singh also spoke about increasing trade between the two countries. Trade between India and Japan reached about 14 billion dollars this year. 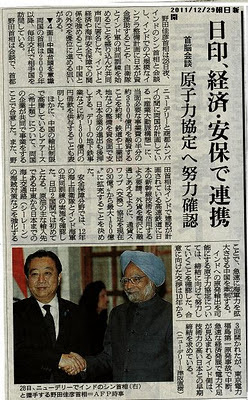 My thought/opinion on this issue
I have learned that PM Noda visited India from this program. Now, his party are facing serious problem that several politicians have left the Japanese Democratic Party in opposition to a plan to rise rate of consumer tax in the future.

Asahi says that two countries have confirmed that they make an effort to agree to corporate on a development of nuclear power. But, I cannot agree this Japan's policy because I think that Japan should consider all policies on the use of nuclear power after Fukushima.
投稿者 bikenglish 時刻: 7:12 AM 3 comments:

I have finished reading a book written by "Genyu Soukyu"（玄侑宗久） who is a Buddhist priest in Fukushima and a winner of the Akutagawa prize（芥川賞）. The title of the book is "Fukushima ni ikiru"（福島に生きる）.

He writes about the difficult situation that people in Fukushima have faced. He also writes about his decision to fight it with them.

I have again recognized that we are facing at a very difficult problem. We have never experienced it in the past.

He says in the book that he has started a foundation that has supported people who have been in bad situation. The foundation's name is "Tamakiawaru-Fukushima-Kikin."(たまきはる福島基金).

I donated a little money to it, and I will do it again when I have surplus money.


Turkey has reacted angrily to a French parliament vote. The lower house in France approved a measure that would make it a crime to say that the death of many Armenians almost 100 years ago was not genocide. Armenia says Turkish troops killed one and a half million Armenians during the First world war. Turkey says many Armenians died.  However, it says the death were the result of civil war and not genocide. In answer to the vote Thursday, Turkey has told its ambassador to leave the country. It has also banned the French navy from Turkish waters. And it is not letting French military airplanes use some Turkish air space. The law now goes to the  French Senate for a vote. Hundreds of thousands of French citizens have families that came from Armenia.

"Tonakai" is a basic meat in Alaska 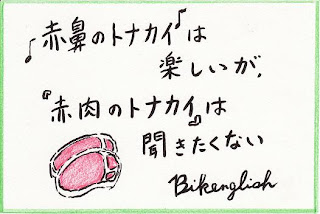 Reindeer is a well-known animal in Japan that Santa Clause uses to transport gifts children. It is translated as "Tonakai"（トナカイ） into Japanese, but I don't know the origin of the name.

Today, I have learned that reindeer is a basic meat in Alaska through the VOA Special English program. At first, I could not understand this part in it, "children might want to cover their ears for this part", but later I found out it.

"Why do children want to cover reindeer's ears?", first I thought. After considering it, I got to an idea that means "子供たちは、この部分については、耳を覆いたくなるかもしれない。＝子供たちは、このことは聞きたくないかも知れないが".

There are similar stories in the world. Those include that some people in Japan eat a meat of dolphin and some Korean eat dog's meat. And I have heard that people in Britain usually eat a meat of rabbit. They look very similar things to me, but there are many critics against eating dolphin and dog. I do not know why those differences happen on those issues.

A Japanese automaker is planning to help a Canadian mining company speed their development of rare earth metals. Toyota announced on Tuesday it has signed an agreement with Matamec Explorations. The agreement offers Toyota some of the metals it needs to cars that do not use gasoline. The mine's chief officer said Toyota will buy everything the mine produces. Rare earth metals are a set of 17 chemical elements that are not rare. But they are usually found in amounts that do not make them financially valuable. China currently produces almost all rare earth elements.

My thought/opinion on this issue
It is not old news that China used stopping the export of rare earth to Japan as diplomatic measure in answer to Senkaku Island problem. It is not good situation that one country monopolies one  resource.

I stop in at a cafe named "Tsujiri"（辻利）once or two times a week to listen to VOA Special English programs recorded in my IC recorder after working.. It is only about 20 minutes, but I am not bothered by anything, enjoying good foods there, so it is my favorite time.

Pakistan says the American military has left an air base in the country's southwest. Pakistan ordered the American military to leave the base in answer to a Nato air strike that killed 24 Pakistani soldiers last month. The Pakistani military says it took over the Shamsi base in Baluchistan province on Sunday. As the last flight, carrying American troops and equipment, departed. American media report United States military used the base to launch unpiloted aircraft to attack al-Qaeda and Taliban militants along the Pakistani-Afghan border. American intelligence experts say the withdrawal from Shamsi air base is not likely to hurt the drone attack plan in the border region. They say the American military can still fly the drones from air fields in Afghanistan.

My thought/opinion on this issue
I have learned a new term, "drone" in this news. High technology cuts cost of war and prevents soldiers from considering killing not by facing death. They can kill people like playing video games.
投稿者 bikenglish 時刻: 9:40 PM 1 comment:


A leading Japanese food manufacturer says the radioactive metal cesium has been discovered in its baby food. The Meiji Company said Tuesday that it has launched an immediate recall of 400,000 containers of powdered baby milk. The company said the level of cesium were well below government safety limits. The Meiji company said it volunteered the recall. And it said it is not sure how the substance got into its powdered milk. But it says it suspects it came from the Fukushima-Daiich power Plant in March. The plant was struck by the earthquake and tsunami. Cesium cannot be seen, tasted or smelled.

My thought/opinion on this issue
I live in a place far from Fukushima, so I have not been conscious of the radiation problem in daily life, especially in food. But I can easily imagine that people in Kanto area have become nervous about it.

Now people in Japan have faced very difficult situation. However, I expect that people will conquer it with wisdom and calm.
投稿者 bikenglish 時刻: 7:37 PM 1 comment:

I have learned an economics term-"demographic dividend"- through the VOA Special English program. It is a difficult and unfamiliar word, but has brought a new idea to me.
The center of world economy has been changing, I think from recent news. Most people have recognized that it is in US or Europe now. But, it may move to China, India or Brazil in the future.
By the way, Japanese word translated from"demographic dividend" is "人口配当（or 人口による配当）".
投稿者 bikenglish 時刻: 8:19 PM 2 comments:

Arms control experts are disputing a study that claims China may have many more nuclear weapons than officials estimate. A professor of Georgetown University and his students say China could have up to 3,000 nuclear warheads hidden in underground passways. The official estimate is that there are only 250. Professor Philip Kerber's report has started a dispute among experts on China's nuclear weapons. The professor is a former official at the American Defense Department. He has not answered calls from VOA. Gregory Kulacki, a researcher at the Union of Concerned Scientists told VOA the group's research methods are irresponsible, incompetent and lazy. The student used military magazines and Internet sources such as blogs and satellite images in their research.

My opinion/thought on this issue
I do not believe what the report claims, either. But very limited people know the accurate number of China's nuclear weapons, I think.
投稿者 bikenglish 時刻: 8:17 AM 1 comment: