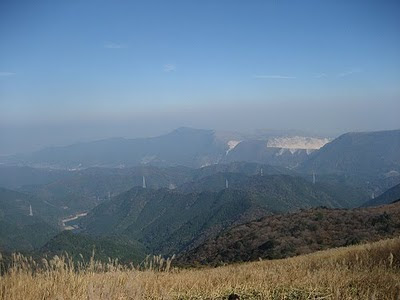 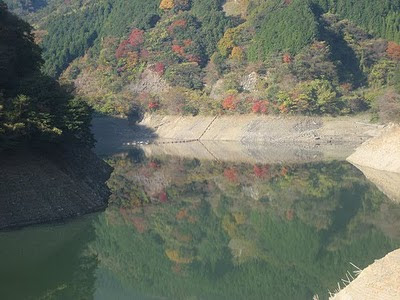 The Fukuchi-yama（福智山） is the highest mountain in my area. It is about 900 meters high. The top of the mountain has no obstruction for viewers, so people can enjoy panorama there. It is one of my favorite mountains.

Last Sunday, I climbed it with my several old friends. I have ever climbed the mountain several times in the past, however it was the first time for me in five years.

It was very fine and the autumn leaves looked very beautiful. We enjoyed a good day in autumn.

"AERA"（アエラ） is a weekly magazine released by Asahi Shimbun(朝日新聞）. I am looking forward to seeing a short message in its advertisement on a newspaper each week because it let me chuckle every time. It contains a kind of "word play".

This time, I try to explain it. We often use only one Kanji character to express a country's name or itself. For example, "米（べい）" means the United States of America. "仏（ふつ）" means France. "露（ろ）" means Russia and it also can be pronounced "つゆ". And "つゆ知らず in Japanese means that (a person has) "unconsciously" (done wrong or done something that he does not plan to do at first).

There has been a dispute on small islands near Hokkaido（北海道） between Japan and Russia. It is one of on-going issues that Japan has faced now. You can learn more about this problem here.
投稿者 bikenglish 時刻: 8:33 AM 2 comments: