Now, many people in Japan have taken long holiday from the end of December to the first of January. This time, my holiday continues for 9 days and it is the longest one that I have ever experienced. I think that I have to feel happy for my good situation because recent recession have lost many jobs in Japan (but I have not been affected by it, now).

By the way, the second day of my holiday, I took part in Mochi-tsuki（餅つき） event.

My wife works at a laboratory of a medical college, and its its professor's families including his a lot of relatives held it.

In recent days, Mochi-tsuki is not a routine event for many Japanese, although it is a traditional event to welcome a happy new year.
投稿者 bikenglish 時刻: 9:46 PM 2 comments:

It was a little bit cold, but very fine and good for biking. I enjoyed riding on my home course.

I would like you to see its scenery, so I have placed several photos. 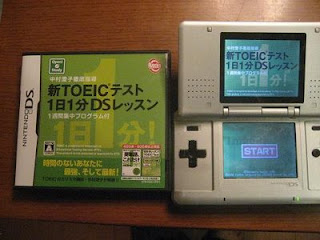 I have started studying for TOEIC that will be held on January 11, 2009. This time, I have decided to use DS for my study. My last score on TOEIC was 720, so I would like to get more than 820. I believe that I can reach to it if I finish all programs on the software by the test.
投稿者 bikenglish 時刻: 7:59 PM 2 comments: 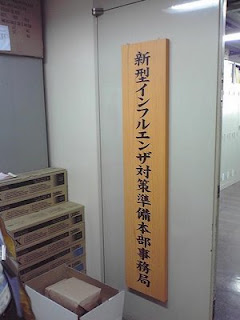 Today, I found this sign when I went to my office's headquarter in Kokura, city of Kitakyushu.

It is said that an outbreak of new influenza must happen in some place in the world in near future.
投稿者 bikenglish 時刻: 9:20 PM No comments:

Some retired "Sumou"（相撲） wrestlers open their own restaurants. Their dishes are commonly named "Chanko"（ちゃんこ） or "Chanko-ryouri"（ちゃんこ料理） because the diet for wrestlers is called "Chanko". "Chanko" generally includes many kinds of foods to increase weight of wrestlers with good nutrition, and is not a special one kind of food. But, generally, the main dishes in "Chanko"restaurant is "Chanko-nabe"（ちゃんこ鍋）

Last Sunday, my family had a dinner at a "Chanko"restaurant where is in 15 minutes by car from our home. Its name is "Chanko Ouga"（ちゃんこ 皇牙）. There were several photos related to "Sumou" in the restaurant. I have placed them to share the atmosphere of "Chanko" with you.

There are special schools named "Chosen-gakkou"（朝鮮学校） in Japan. The ancestors of students are Korean who were taken to Japan mainly from the northern part of Korean peninsula where now is North Korea.

There is also "Chosen-gakkou" in Orio（折尾） area where is next to my town. In the past, especially when I went to high school, I used to often see many female students wearing "Chima-jeogori" styled uniforms. But, now we cannot find them. Why?

Because, now they have been wearing same blazer styled uniforms that are used in many high school in Japan. In other words, we cannot recognize whether they belong "Chosen-gakkou" or not, by their uniforms.

Several years ago, some abuse incidents against "Chosen-gakkou" students had happened in Japan. I think that they have stopped using their traditonal uniforms to avoid that bad situation. It is sad thing, but fact.
投稿者 bikenglish 時刻: 9:51 AM 2 comments:

Last Sunday, I took part in an event that included "Mika-gari"（みかん狩り）. Health insurance association corporation organized this event to improve its member's families health. The first program was "walk rally"[players must solve several questions that are placed in check points in limited time.], the second was bingo competition, and third was "Mikan-gari".

It was a little bit cold, but we were satisfied with this event because we got good "Mikan".

My wife says that Mikan is her favorite in all fruits because we can easily peel it with hands (we must use knife to peel other fruits).

I took several photos of this event. I hope you can feel the atmosphere of Mikan-gari.
投稿者 bikenglish 時刻: 8:13 PM 3 comments: