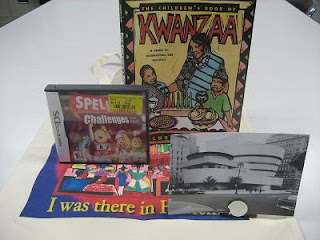 I went aboard from Dec.21 to 26 with my wife for sightseeing. I show several goods that I bought during this trip in this picture. What is the city where we visited? The answer will be in next article on my blog.
投稿者 bikenglish 時刻: 10:06 PM 4 comments:

a good cource for bike-ride 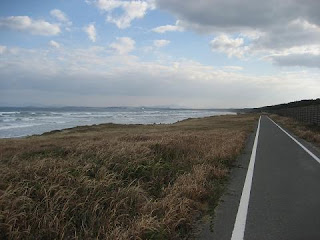 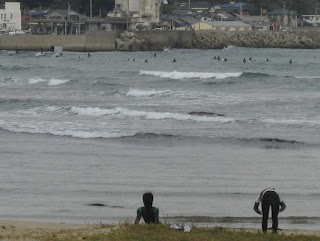 Last Sunday, I found a good cource for bike-ride in my neighborhood. Its length is about 10km along sea coast, and it is a special road for bike or running, so it is very safe. I wonder why I had not found this good road by now.
At the end of the road, I saw a little bit funny scene. Do you think what they are doing? They are not penguins, surfers. We can find them on the day when big waves happen.
投稿者 bikenglish 時刻: 9:45 PM 5 comments: 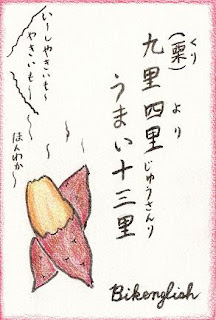 The season when a sweet potato is delicious has come.

I have written a Japanese phrase about a sweet potato. This is a kind of a copy.

And it is a kind of a play of words, so you don't have to consider an important meaning in it.

Why does "Jyu-san"（十三） appeal at the end of this phrase? The answer is very simple, because 9 plus 4 equal 13.

This phrase is formed with "Shiti-go-chou"（七五調） that is familiar to Japanese people. In other word, it is written in "Goro-ga-ii"（語呂がいい）. Ku-ri-yo-ri-u-ma-i=7, jyu-u-sa-n-ri=5.

In direct meaning of this phrase, "a sweet potato is more delicious than a chestnut".
投稿者 bikenglish 時刻: 9:49 AM 3 comments:

I often go to a store named "Red Cabbage"（レッドキャベツ） to buy foods. When I stand at its meat corner, always I hear this song. There is a lot of "comic song"s in Japan, this is one of my favorite comics songs. You can read its lyrics at this website.
投稿者 bikenglish 時刻: 9:57 PM 6 comments:

I have learned that "Obama girl" has been very popular in the USA by today's newspaper. This is interesting thing, I think. I tried to find "Hillary boy" or "Clinton boy" on the Internet, but I could not.

P.S. I can find the song's lyrics, here, thanks to Marian-san.

P.S. Thanks to joshf-san, I could learn about this song by "Hillary girl". I think it is very catchy and like it than Obama girl's. But I have not been satisfied with it yet because its singer is a girl, not a boy.
投稿者 bikenglish 時刻: 6:15 AM 5 comments: 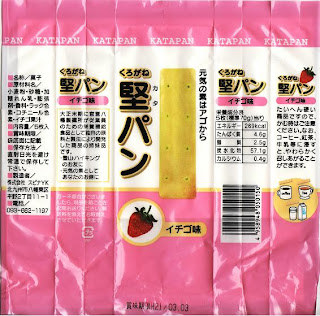 There was a national ironworks named "Kan-ei Yahata Seitetsu-syo"（官営八幡製鐵所） in the nothern part of Kysuhu. It was taken over a private company, and its name is "Shin-Nihon-Seitetu"（新日本製鉄）.

"Kata-pan"(堅パン )was invented as a light food that was given to its workers by the national company. And it has become a familiar snack to people who live in this area.

When I was a child, I used to eat it. But, in those days, it had only one taste, plane(milk taste). But, now, it has three tastes, strawberry, spinach and sesame besides plane.

"Kata-pan" is well-known for its hardness. But when I ate it last Sunday, I felt that it was not so hard in comparison with what I used to eat in my childhood, and I felt it was a little bit unfortunate thing.

P.S. "Oyatsu " or "O-yatsu" is a general name of light meal that people eat between lunch and dinner. It comes from a traditional time's name "Yatsu-doki"（八つ時）means time between about 2pm and 4pm. Generally, people call a light snack taken at about 3pm "Oyatsu", but you can use it in anytime to call a light snack.
投稿者 bikenglish 時刻: 8:46 PM 11 comments: 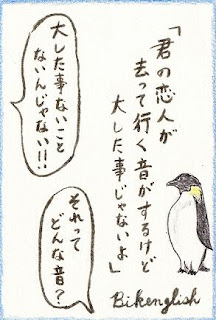 The Penguin Cafe Orchestra is a music band that was popular in the 1980's with its unique sound. There is a music with a long title by the band. It is "The sound of someone you love who's going away and it doesn't matter". I like it.

I would like you to listen to the music and tried to find it on the Internet. But, unfortunately, I could not find a full version, but could find a very short version, here.

And I write its long Japanese title in this pictute.