I had visited Matsue-city（松江市） and IzumoTaisha（出雲大社） shrine in Shimane Prefecture on September 22 - 23 with my family.
The first day, we arrived at Matsue-city after about five hours train-trip. We had a lunch at a Soba（蕎麦） noodle restaurant because it is a representative food of the area. After  that, we went to Lafcadio Hearn's（ラフカディオ・ハーン（日本名）小泉八雲） former residence and the Matue-Jyo（松江城） castle. When we went up to the top of the castle, I could feel a comfortable wind there.

We stayed an accommodation in the Tamatsukuri-Onsen（玉造温泉） at the night. We enjoyed the luxurious diner and its Onsen.

The second day, we went to Izumo Tisha shrine about 1.5 hour away by a bus which only one crew operated. He drove the bus, explaining the sight seeing area by himself. He also collected a fee of passengers. He was a little bit old man, but a good worker, I think.

Izumo Taisha was a good shrine with dignity. I prayed good future of our family there.

We decided to leave there before lunch time because of the concern about traffic jam and slight tiredness by hot weather.

We had a short stop at an old train station that was used as the JR's station by 1990. It remains its style in which it was built in Taisho era.

After we took a desert at a cafe near the JR Izumo-Shi station（出雲市駅） and bought some souvenirs at the station, we left the Shimane Prefcture. 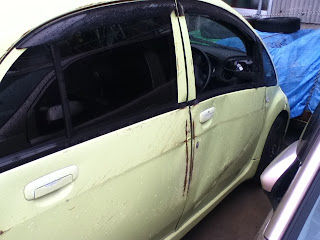 On August 27, my wife was injured from a traffic accident. Fortunately, her injury was not serious, but she had to stay at a hosptal for three days after an operation that got rid of pieces of glasses in her arm. Now, she has returned to normal condition.

Her car, "Mitsubishi Ai"（三菱アイ）, turned over and lied on its side when another car collided with it. It had very serious damage from the accident. The reason we think is that the car is "Kei"（軽） that is a small car with less than a 660 cc displacement engine. So we decided to buy a bigger car than "Ai".

The cost to repair it is higher than the present price of it so the negotiation for the accident has to be on the price.

Yesterday, we ordered a new car, "Honda Fit" at a car shop. It will come to us at the end of October.