I have learned about Obama's choice for the top members of his economic team from newspaper and VOA. The articles have left something interested in my mind.

Asahi shimbun explained that Timothy Geithner can speak Japanese very well by using Japanese word "tannou"（堪能）. And it said that he can read "Izakaya"（居酒屋）'s menu.

But, it is very difficult for foreigners to speak Japanese very well because of its difference from languages based on alphabet, I think. "Tannou" should be used for very skilled speaker in Japanese. I hope to see his speaking Japanese on TV program in the future.

And Barak Obama selected Christina Romer to lead the Council of Economic Advisor. She is an economist and an economic historian at the University of California, Berkeley. One of her major is about how the American government dealt with economic crisis during the Great Depression. But, I doubt that her knowledge about those day's issues can be useful to solve difficult economic problems in this time when the globalization of economic have improved and the information by Internet can be spread widely and faster.

I am looking forward to seeing following news about these issues.

P.S. Later, I used a big dictionary named "Koujien"（広辞苑） to comfirm the usage and meaning of "tannou". But, I was a little bit surprised with the result. Because, the correct pronunciation of the word "堪能" is "kannou", not "tannou". (But, many people pronounce it "tannou", so it is not wrong.) Japanese is no walk in the park, for natives. (Thanks, Jon-san!!)
投稿者 bikenglish 時刻: 7:10 AM 2 comments: 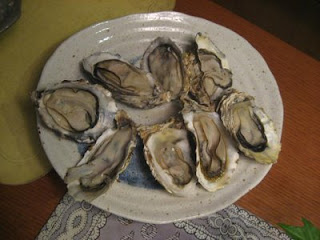 Now, it is a good season to eat oysters. The eastern coast of Kitakyushu is becoming to be well-known as an oyster producing area. Fishermans have named their productions "Buzen-hitotsubu-kaki"（豊前一粒かき）.

Last Saturday, I bought their oysters in Moji ward after taking part in a funeral held there. I could get them at lower price than normal.

I and my daughter enjoyed it very well, but unfortunately, my wife and son said that they did not like it very much. I was sorry with this result.
投稿者 bikenglish 時刻: 6:47 PM No comments: 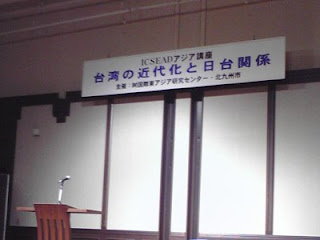 Now, I am becoming interested in Taiwan after reading "Kobayashi Yoshinori"（小林よしのり）'s "Taiwan-ron"（台湾論）.

Last Wednesday, I listened to a lecture by a Taiwanese named Lo, Fu-chen（羅福全） about the modernization of Taiwan and the relationship between Taiwan and Japan at a hotel in Kokura, Kitakyushu.

His explanation about the relationship between Taiwan and Japan before the World War 2 end was almost equal to things written in "Taiwan-ron".

I would like to summarise what he spoke in this lecture in my (poor) English.

In simply speaking, the one hundred years of Taiwan's modern history can be separated to the first 50 years and the second 50 years.
The first can be called the development under the colonial rule by Japanese government. In those days, there were several problems from the colonial policy, such as political suppression, financial exploitation, forced conscription, and some discrimination by Japansese.
However, there were a lot of good things which Japanese left after their withdrawal, and that have led the modernization of Taiwan. He says that people should evaluate them with cool head. These include good education system, good infrastructure, and agricultural development.
During the second 50 years, based on good education and infrastructure left by Japan, Taiwan had modernized themselves straggling with oppression by "big" China. At last, it has become, truly, a democratic country in 2000, following Japan.

Now, I have a plan to vist Singapore next year. And now, I am becoming to want to visit Taiwan to see some heritages that Japanese in Meiji era left in Taiwan.
投稿者 bikenglish 時刻: 4:47 PM 2 comments:

Last Sunday, I took part in an cycle event called "Cycle Tour Kitakyushu". I rode my bike on about 80km enjoying Autumn leaves. It was an event, not a race, so I did not receive the record of my ride. But, I was satisfied with the result because my average speed was about 20.8km, and was faster than I thought.

The weather condition was cloudy and had a little bit rain, but it did not bother me.

This time, it was the first event and there were several problems. We had to stop many times at signals because the course was in city areas. I hope that this will be improved next time.

Unfortunately, I forgot to bring a camera with me, so I link this archive to here.
投稿者 bikenglish 時刻: 9:42 PM 2 comments: 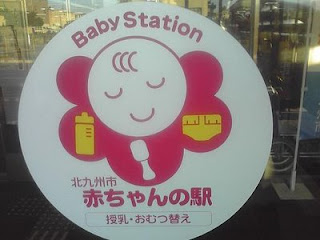 Now, the local government that I have worked for have started a project called "Akachan-no-Eki"（赤ちゃんの駅）. But, I feel something strange from that name.


There is a similar expression to this name. It is "Michi-no-Eki"（道の駅） that is a building along national highway for drivers to take short rest.

These expressions are similar, but what they mean are very different, and Japanese language is very complicated, I think.
投稿者 bikenglish 時刻: 9:05 PM 3 comments:

This is a document that shows menus of lunches served at my daughter's elementary school. It lets me remind of school lunches （給食） in my childhood.

In those days, it included a food made from wheal meat because it could be purchased at very low cost. I liked it, but now, it becomes one of expensive foods, so we can rarely eat it.

We had not had rice meals（ご飯） as school lunches in those days. Every menu was formed by bread and other foods. I have heard that those day's people believed that children should eat bread, not rice. Because bread could make children smarter like Westerners. Of course, now, there is no people who believe it, my daughter can eat rice as school lunches.

School lunch is one of good communication tools because everyone has similar experience, especially people in same age at same area have eaten same foods.
投稿者 bikenglish 時刻: 4:49 PM 3 comments: 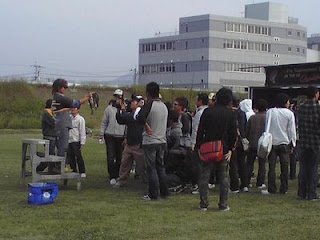 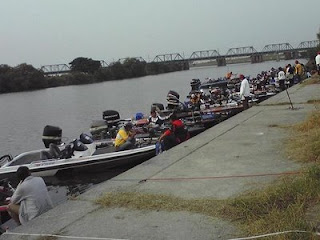 Last Saturday, I saw a lot of people gathering in a place along Onga-gawa river when I rode my bike. Later, I found out that a Black Bass fishing competition was held there. Onga-gawa river is known as good place for fishing Black Bass.

Sometimes, I go to fishing, but I have no experience to fish a Black Bass. Because it is said that the fish is not good taste does not taste good. (But, there is an opinion that it is not bad.) My policy about fishing is "catch and eat", not "catch and release".
投稿者 bikenglish 時刻: 6:11 AM 2 comments: