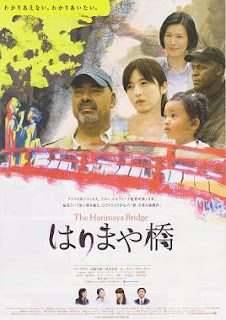 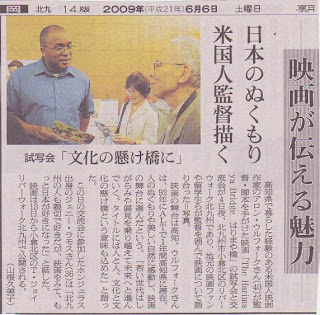 Last Thursday, I saw a movie named "The Harimaya Bridge"（はりまや橋）. I took part in an event that projected it before it is officially released on June 13, and included a short appearance of this movie's director and writer, Aaron Woolfolk and an exchange activity with him.

I would like to watch this movie after I read an archive about it on my friend's blog.

Aarone Woolfolk talked about his this movie to the audience before it started. Unfortunately, I could understand only a very little part of his English, but "you know" in his word left in my ear, because he used it very often. In this case,"You know" means "Eee"（エー）that some people in Japan use in their speech to connect with next words, I think.

And, he didn't speak any Japanese, though I expected that he did. But, I could understand his situation after I had learned that he spent only one year in Japan as an ALT(assistant language teacher).

After I saw this movie, some comprehensive impressions left in my mind. Those mean that it is a good example of an educational movie, but not an entertainment movie. This is reason because its story is too simple, many people can easily imagine what will happen next. And there might be some sponsor's views that it should be educational. I felt some kind of "human right educational movie"（人権啓発映画） in it.

The main character is described as an arrogant American and a typical (many Japanese think) foreigner. For example, he does not remove his shoes in Japanese room. And he feels anger when he learn a Japanese man whom he speak cannot understand his English.

These scenes may look curious to foreigners that who have good knowledge about Japanese style, I think.

I have to refer to good parts of this movie. You can find "beautiful green" in Japanese mountain area in this movie. And, you can also see the director's special skill on movie, because he have studied movie techniques at the Columbia University.

When the film roll satrted, I left the theater before the exchange activity started.
*The second photo is from Asahi newspaper on June 6.

Thanks for your comments on this movie. The trailer for it looked interesting and it's really pretty cool that you were able to catch an advance showing of it.

I'm a bit disappointed that it sounds like a preachy (説教をしているような) movie, but I'm optimistic that it will be an interesting one nonetheless.