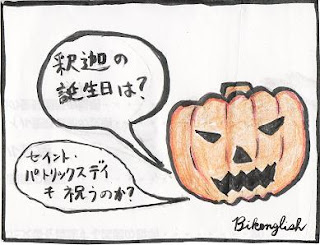 Halloween is coming soon. I can find "Jack O' lantern" in many places in this season. But I cannot understand why many Japanese celebrate it.

We are greatly influenced by American economics and culture. So, Halloween is a typical issue of them, I think.

There are a lot of Buddhists in Japan, and there is a custom that celebrates Buddha's birthday. (It is April 8.) But the number of people who celebrate it is not so many, it seems that the popularity of it is less than one of Halloween. Some people don't know when it is celebrated.

I have learned that many Americans celebrate Saint Patrick's day on March 17 through VOA special English.

Now, I have concerned that the following events might happen in Japan in the future.

"Cities all over Japan are coloured by green(Irish color), and people say "We are a little bit Irish on this day" each other."
投稿者 bikenglish 時刻: 9:35 PM

I read that there were some problems with Halloween in japan and out of control and rude. This make me feel sad.

Here in Canada, there is a special day or event for almost any type of group of citizens. Whilst, most are fun, some are over the top.

Talk to you soon.

I live in America where Halloween is a big deal. But Halloween is not really a religeous celebration. It comes from pagan harvest festivals, and was later megered with several other traditions of "Devil's night" or "night of the dead" (which i believe you have a form of even in Japan). Mostly its significance now is Pop-Culture, s d does not suprise me to see it in Japan.

Also, on Sint Patrick's Day: We celebrate for different reasons. First of all, most american's in Chicago and Boston came from Ireland.
Second, it is a Catholic saint that brought Christianity to Ireland.
Third, once again, pop culture. Being an Irish saint, Irish celebrate him by drinking. So americans (as anyone else would) jumped all over his as an excuse to drink.

I celebrate Saint Patrick because he rid Ireland of Snakes, which i hate snakes being that where i was raise was full of deadly rattle snakes.

hope this random info is helpful...

Thank you for adding comments on my blog. I am very happy because I have heard directly some opinion from people who live aboard.

What I want to mention in this archive is that almost Japanese have a tendency to accept foreign things without considring their meanings. It is sometimes good thing, and sometimes bad thing, I think.

I will write a new archive by next Sunday, please check it again.