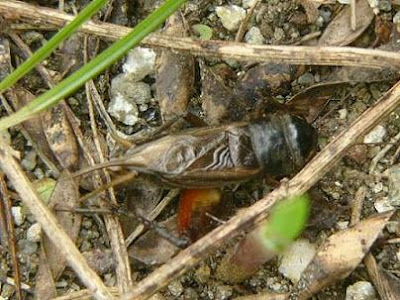 I found this cricket in the garden of my house. It is called "Enma-koorogi"(えんまこおろぎ). It chirps like this, "Kolo-kolo-kolo-li-i-i-n"(at least, it sounds like this to Japanese). In this season, I fall in sleep every night listening to this sound because I live in a countryside.


In Japan, some people raise a kind of cricket "Suzu-mushi"(鈴虫) and enjoy its sound.


I heard that Japanese people use a different part of their brain to listen to the sounds made by insects from a part that Westerners use. So, it sounds like a language, a song or a comfortable sound to Japanese, but only a noise or a noisy sound to Westerners.


I don't know that this is fact, or not, but it is very interesting, I think.


How do you feel "Mushi no Ne"(虫の音), comfortable or not?

P.S.
I have placed "Club Tropicana" by Wham at "My favorite song". You can listen to sounds made by a kind of "koorogi" before the sing starts.

Now. I remeber that there is a well-known children's song whose subject is "Mushi no Ne" in Japan. You can listen to it, here.
投稿者 bikenglish 時刻: 7:13 AM

in italy, "mushi no ne" is called "カント ディ インセッティ（canto di insetti: song of insects）".
i feel it beautiful (but sometimes noisy...).

I don't mind the sound of insects at all. It makes my surroundings feel more natural, I guess you could say. (Whoa, Wham! That takes me back! I don't know this song, though.)

Thanks for the link to the song, but I couldn't find a way to make it play.

I am sorry that you could not listen to it. Why? When my computer connects the website, the song starts automatically. I think that your computers's software like "javasprict" does not do effect from some reason.