Happy New Year, I hope that you, visitors on my blog, have a good year.

Now, I am in the year's end and start holiday（年末年始休暇）, so I have spent time with my family members.

By the way, I found an interesting comment by a well-known philosopher in Asahi newspaper on January 1st. This time, I show it and try to translate it into English.

Takeshi Umehara （梅原猛） is one of Japanese representative thinkers. He says following in the interview.

"A word called "Bunmei-sai", civilization-related disaster appears in my mind soon after I saw the accident. Earth quake and tsunami are natural disasters （天災） The government and Tokyo Electric Company failed to have good preparation to the risk, it is a disaster caused by human's failure（人災）. But, it is not good enough to explain this disaster by these words. Most of developed countries around the world have depended on nuclear power station for their energy. The accident is also disaster of civilization." 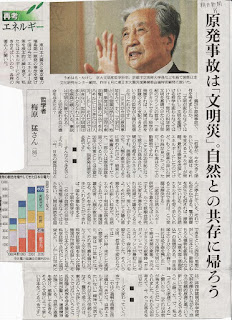 Happy New Year! I hope that you and your loved ones have a great year as well. Enjoy your holiday!

Thanks for the interesting article. The problem of nuclear power is complex. I should read up on it to learn more about it.

Thank you for a good advice. And your Japanese helps me understand the way of "Enjoy".