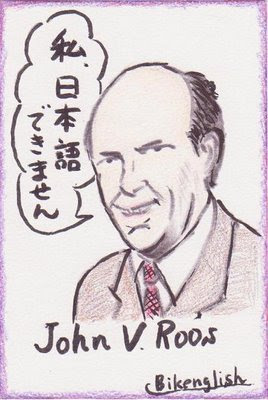 Several days ago, I found an article that Japanese ambassador to USA apologized on May thirtieth in person to the 73 surviving POWs of the Bataan Death March during the WWⅡ. But, a question remained in my mind after I read it. "Why do only Japan have to apologize to the victims during that war?". It doesn't mean to deny the importance of apology to the POWs.

Now, I have studied "what had happened in the 1930-1945 " from reading books that deal with them. On my now thought, if Japan have to apologize to the victims of all cruel incidents that Japan did during that war, the USA should apologize to a lot of civilians who were killed by two atomic bombs and many firebombs. Now, we have to examine all historical things that led to the WWⅡon a neutral position to create the peaceful world without threat of nuclear weapons, really I think.
By the way, the American ambassador to Japan has not been decided yet. I wonder what makes decision delayed. The Asahi newspaper said that John V. Roos is a possible candidate to that job. It said that the Obama administration nominated him because of his financial support to Obama's presidential campaign. He is a well-known lawyer, but does not have good knowledge about Japan, it said. Probably, he cannot speak Japanese.

At first, I had been disappointed that a person that do not have good experience on Japan can become an ambassador to Japan. But, later I understood this situation. It means that USA do not consider this position is very important because there are not any outstanding conflicts between two countries. It seems that USA does not think that Japan is a tough negotiator to it.
投稿者 bikenglish 時刻: 10:41 AM

Well, I guess it's just the same as with Germany in Europe. They always have to say they're sorry about what the facists did in WWII. Germany is considered to be the defeated party in the war (and the one who started it), so everyone takes it as granted that they should always apologise for it. I believe, there has already developed some complex of guilt among germans. On the other hand Russia, the USA, the UK, etc. are supposed to be the winners, and I can hardly recall any apologies for the crimes done at that time from their side.

Oh, and by the way, you have done a nice pic^^. Though I think he won't be able to say even this when he enters the office.

Both sides can apologize all they want, the apologists probably weren't even born at the time or very young to understand since the war ended over 60 years ago. Each side did something horrible, it was war, dwelling on the past will accomplish nothing; the best way to apologize is to not leave more sons and daughters without a father growing up or spreading ignorance from the highest branches of the government about how the other side is 'not human'.