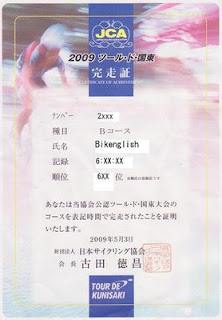 On May 3, I took part in "Tour de Kunisaki"（ツールド国東） that is a cycling event held in "Kunisaki "peninsula（国東半島） with my friend. This was my third participation in a row.


At the opening ceremony, the chief stuff said that the participants was about 2900 people this year, about 1000 people more than last year.


The start time of B course was 9:20, and I came back to the start point (its goal) at 15:40. The record time included short rests at two aide points. I was satisfied with the result at this time because I could run about thirty minutes shorter than last year. And, I could enjoy this event more than last year because of less tiredness.

My friend took part in the A course that is 160km long. He also finished the race in limited time (8hours), but he was in a little bit dangerous situation in several minutes before goal. He said that he might have been in shortage of sugar in blood.(hunger knock?)（低血糖？）

On our way to our accommodation, we used an onsen that is relatively small and used mainly by local folks to clean and heal our tired bodies. Its entry fee was only 320yen.

After that, we got to the accommodation named KIORA COTTAGE that is operated by a woman from New Zealand.

We were welcomed by her husband who is a very tall Japanese man, their two pretty children and of course, her. We had a very good conversation eating good dishes that she made. It included several things of New Zealand, the difference between two country's culture and education system, the 100km walk that her husband participated last year, and etc.

We had a good sleep with very comfortable beds.

Next morning, her husband had already left for his extra job at the town' s festival when we had a breakfast. We had a good conversation again.After that, she showed us her organic garden. We were very impressed by its good conditions, many kind of vegetables, especially beehives and a chicken house.

On our way back to Kitakyushu area, we talked that we had a really valuable experience at KIORA COTTAGE.

I could enjoy this holiday because of a good bike event and meeting with a warm family, I think.

You know, it really sounds like you have a nice life out there. You're in Kyushu, right? I clearly need to get out there.

You really did a great job with your bike ride. I'm glad you enjoyed your time here at Kiora Cottage. We are looking forward to seeing you again soon!
I am also looking forward to reading about more of your adventures in your blog soon.
Otsukaresamadeshita!