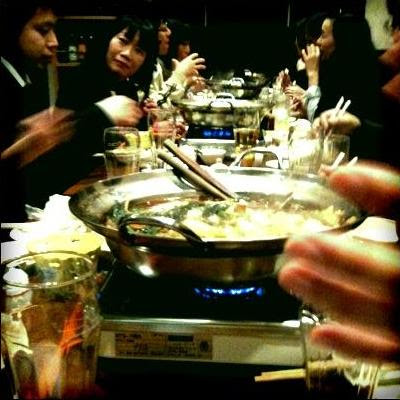 "Motsu-nabe"（もつ鍋） has become a popular food for ordinary people in Japan. Generally, "motsu" means animal's internal organ, but in this case, it means bovine's intestine.

Last Saturday, I took part in a party of parent's group of my son's high school wind orchestra club. There, I ate "motsu-nabe" drinking beer.

People in Japan can get "Motsu" in low price because it used to be thrown away in the past. So, "motsu-nabe" is a less expensive food.
投稿者 bikenglish 時刻: 8:40 PM

I'd not heard of motsu-nabe before. I don't normally eat intestines, but I suppose it's pretty good! I suppose eating it is a good way to save few bucks too.

By the way, is "People in people" a typo?

My explanation might be not good enough. "Motsu-nabe" is said to be born in Fukuoka prefecture, so we often see many restaurants that serve "motsu-nabe" in our neighborhood.

As you might know, "motsu" has strong smell. Food dealers should wash it very carefully. And we cook it with miso-based soup or soy source based soup.

Yes, "people in people" is just a typo, thank you.