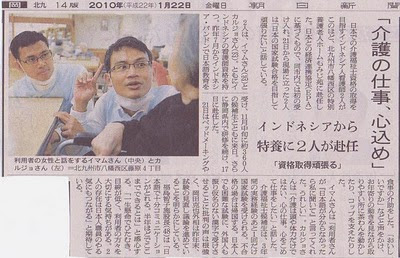 The population of elder people is increasing, and it has become a serious social problem in Japan. And less people want to work as care worker in nursing homes because of relatively less payment, and it has another social problem.
This article says that two Indonesian care workers have started working in a nursing home in the city of Kitakyushu. This movement is based on the EPA (Economic Partnership Agreement) between Japan and Indonesia. They have to take a national license in three years to stay in Japan for working as care worker. It is very difficult for foreign workers to pass the test because its texts do not have "furigana"（ふりがな）.
I have been interested in "international cooperation" work for a long time. But, it is difficult for me to work aboard now because I am not so young and cannot resign my job for economic reason.
However, I can do support them along their needs even though I have stayed in Japan. I think that it is a kind of "international cooperation" work. I am going to meet them in near future and I would like to help them if they need my support.
投稿者 bikenglish 時刻: 9:56 PM

You seem to be a very community-minded person. That's good, since we need people like you around!

Thank you for posting a comment.
I met this two young Indonesian men in a nursing home. I will meet them again next week and talk about my support activity for them.