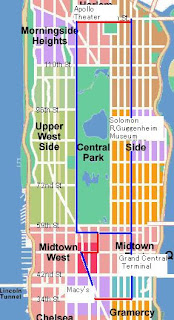 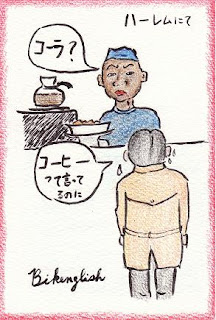 It was rainy day since early morning, but not cold. At first, we visited the Apollo Theater that is a well-known music hall in Harlem. I had wanted to see it for a long time. It was closed and smaller than I thought.

Near the Apollo Theater, one African American man and a Japanese woman stood to sell several art goods. His name was "Franco the great", and she said that he was known as "Halem's Picasso" who left his works on the shutters on Harlem's shop. I bought a simple cotton bag that has his art. He signed his name on my back.

Later, I was a little bit disappointed because the bag had a price card that showed $6.95 (I paid $15) and he was not born in Harlem. I felt that their concerns were mainly their businesses.

They suggested that we could listen to the Gospel ceremony at a nearby church. We decided to follow it and went to the Greater Refuge Temple.

When we entered the church, we were guided to upstairs, there were many foreign visitors including Japanese like us. Also here, I felt a kind of "business". After waiting for several minutes, the ceremony began.

The number of gospel singers was smaller than we thought, about ten. When a young man sung as only one, I felt that he was a good singer.But, suddenly, he showed a cramp at the end of his song. I didn't know why he did, but I felt a kind of spiritual messeage like "Japanese Itako".

When we went out of the church, we found an art shop that dealt with works of African Americans. I would find a candle set used in Kuwanzaa ceremony for my souvenir, but I could not find it at a good price. Instead, I bought a book for children about Kwanzaa because it was written in simple English that I could read.

We walked toward east along the 125st. I wanted to go to the center (or heart) of Harlem, but my wife rejected it. She said that a guide book said visitors should not leave the main street like 125st and 135st. I thought that Harlem was safer than the guide book saying, but I felt that my wife was scared, so I compromised and gave it up.

We found a deli on the street for lunch. Its charge sytem was interesting for me because the price of dishes depended on their weights. I ordered a cup of coffee, but the crew could not understand what I said. He said "Cola?". But, finally, I coulud get it.

We walked along the 125st again after lunch and got on a subway at the Lexington Avenue. Our next destination was .the Solomon R. Guggenheim Museum.

The Guggenheim Museum is a building designed by Frank Lloyd Wright and has a very uniquse shape. I learned it through the VOA Special English program and had wanted to see it directly for a long time.

When arriving at the museum, I was disppointed with its looks. It was covered with renovation equipments, so we could not see its outlook. But, its inside was very good and I enjoyed it very much.

At my first plan, I would visit the Jewsh Museum near the Guggenheim, but we could not because of shortage of time. But, I went to it only to see it, leaving my wife at the Guggenheim. I saw several goods that were related to the Jewish in its souvenir shop. I found the Shrek in those things, but I could not understand why it was included in the Jewsh goods. If you know this reason, please tell me about it.

After a short rest at our hotel, we restarted our exploration. Our next destination was the Grand Central Terminal. Its tall ceiling surprised us strongly because we had never seen such huge building. After that, we went to its oyster-bar to eat cramchouder soup, but, it was closed.

We went to the Empire State Building to enjoy the night view of NYC. But, unfortunately, its crew said that the cloudy sky obscured the view in that time, we gave up.

We enterd a Korean restaurant near the Grand Cetral Terminal for dinner. We ate several dishes that were rare in Japan, but we didn't think they were good.

After dinner, we visited the Macy's department. I found a very intereting thing, a escalator made of wood. After that, we went back to our hotel passing through the Times Square.
投稿者 bikenglish 時刻: 3:30 PM

Hello Bikenglish! I love your blog and read it faithfully. I am scared to go into Harlem (it is so full of crime), I can't believe you went! Anyway, I know why Shrek was in the Jewish museum. The writer of Shrek, William Steig, is a Jewish man. I think your wife was very smart to not leave the main street! Thank you for your wonderful blog!

It's a shame that you got ripped off on that bag. I don't know anything about Harlem, but staying on the main streets was probably not a bad idea. Like Aya says, it's apparently not the safest part of the country.

When you mentioned itako, where you referring to Japan's blind shaman? I just read a bit at Wikipedia about them. Pretty interesting.

You found an escalator made of wood? I didn't even know there were such things, but I saw some photos on Google Images. Pretty cool.

Glad that you had fun!

Thank you for answering to my question. This reason is simpler than I thought. I will continue to write archives, please keep to read my blog.

Thank you and I love reading here. I love Japanese culture and food. I read everything I can on Japan. I, too have started to bike at 35! It helps me to clear my head. Keep up your good work! I am now living in Pensacola, Florida. It is so different that the area where you were. Not all the neat museums and things, just the beach.