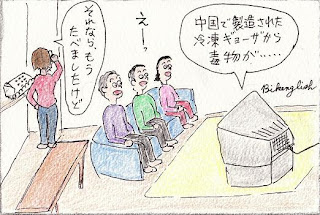 Last Wednesday, a stuff of the F-coop that deals with every-day goods, mainly foods called us at 9:00pm. The store also sells a lot of goods with its delivery system. She (or he) said that a chilled "gyouza" was made in China and was sold to us in November contained poisons. She also said that several news had already reported its problem.

Immediately, we turned on the TV set, NHK news were broadcasting this issue.

The stuff asked our health after eating it. My wife answered that we had no problem.

Probably, most of people in Japan will hesitate to buy foods producted in China until this problem is solved.
投稿者 bikenglish 時刻: 8:43 AM

I love that comic that you made. Very well done. 「えーっ」 indeed! I'm glad that you didn't get sick from it.

We had a similar problem last year (of course, not as dangerous as yours) but some medical companies sold us toothpaste with a contaminated component. And there were about a hundred people with oral problems.
Good to hear you are ok!

Hi!
It´s Susana, I´ve changed my blog place to http://supeinniikitai.blogspot.com/; sorry I had to delete your coments. I wait for them again^_^kisses from Spain

Thank you. We have no problem in our health. A lot of people are complaining of bad condition, but, I think, they have suffered from psychological reason, not physical.

If these problems happen frequenly, people aroud the world would reject all foods from China.

Yah, they are still talking about this on the news. I guess as China grows people will look at Chinese goods more closely. There have already been several problems including pesticides in food, and chemicals in toys from China in the 'States.

I hope that things get a bit better soon.