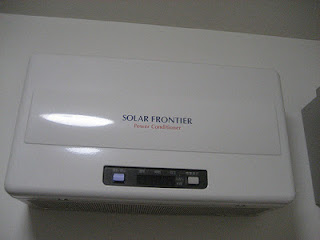 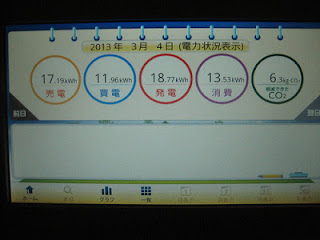 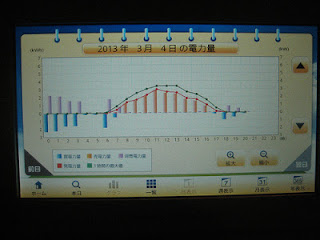 The solar power system on our house has started its operation since January 25. I check this monitor to see how much electricity that the system creates every day. In my calculation, it earns about 800 yen when it is fine.

By the way, "Mirai Syounen Konan（未来少年コナン）" is one of my favorite animation movies. About 30 years ago, it was broadcast in NHK's programs and I was looking forward to seeing it every week.

In the story, a big energy called "Taiyou Enerugi（太陽エネルギー）" plays an important part.

About two month ago, I saw a news program that tells that there is "a dream project" in Japan that makes it able to get electricity that is created out of the earth. The theory of the project is almost same to "Mirai Syonen Konan's Taiyou Enerugi". I was a little bit impressed by it.

Japan is a country that does not have a good amount of natural resources. If scientists in Japan establish this technology, Japan get good energy without depending on other countries.

It seems that your new solar power system is working out pretty well.

I'd never heard of 未来少年コナン. Perhaps it was ahead of its time in terms of technological innovation!

未来少年コナン is an animation directed by 宮崎駿, and has a good story. I think that it has never lost its attractive part although it was made about 30 years ago.