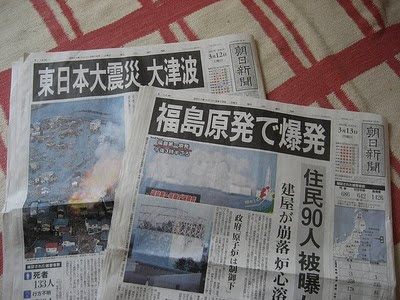 Last Friday, the huge earthquake struck near the east coast of Honshu, Japan's main island. And several huge tsunamis after it heavily broke many rural towns in the area. This photo shows Asahi's headlines of this two days. These mean "terrible disaster by earthquake in the eastern Japan, and huge tsunami","explosion in the nuclear power station in Fukushima (prefecture)".
But, my life does not deffer from normal because there are no disasters from it in Kyushu island where I live. Kyushu is more than 1000km far from the area. In this three days, I have only watched TV programs that have reported the extent of the disaster.
Before the earthquake, prime minister Kan was struggling to run his cabinet well because of several political problems. But these terrible disasters might give him a good chance to continue his political status.
投稿者 bikenglish 時刻: 11:51 AM

Glad to see you're okay, it is unfortunate for those who lost their lives.

Everyone involved in those preventative measures should be commended, from the government that cares about the people above money to the people involved in construction/code enforcement of the buildings.