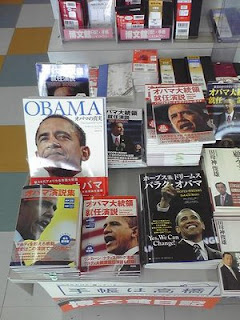 I took this photo at a book shop.It seems that many people in Japan love Obama. And also, I have often heard that commentators in TV programs say the USA's new leader is better than the one of Japan. They say that the prime minister has less leadership than Obama. But, this opinion is nonsense because our political system is very different from USA's, I think.

Obama is
known
as Senator who opposed the war of Iraq although many lawmakers agreed the war. I don't know whether his this behavior came from his humantarian stance, or not.

If he is a true humanitarian, in the future, he should go to Hiroshima or Nagasaki to express apologies to many deaths during his visit to Japan. (but, this cannot come true, absolutely, I think.)
投稿者 bikenglish 時刻: 9:12 PM

I agree that a visit by Obama to Hiroshima and an apology to civilians would be appropriate. However, I also believe a visit by the Japanese to Nanjing and an apology to Chinese civilians would be appropriate (I realize prime minister Tomiichi Murayama and the Emperor apologized for Japan's actions during the war but there's nothing like personal presence in the site where atrocities were perpetrated). An apology from the Chinese for their continued cruelty in Tibet would be welcome, the Turks for their treatment of Armenians and many others. There is a need for humbleness and apology throughout the world.

By the way, Obama was not the only senator to vote against the Iraq war. The full list is here:
http://en.wikipedia.org/wiki/Iraq_Resolution

Thank you for posting your comment on my blog. Of course, I know the genocide in Nanjing, but my knowledge about it is not good enough to discuss here. And also my English is not good enough. But, there is a difference between Nanjing and Hiroshima.

A book that I read in recent days says that USA used the atomic bombs as only an experiment. And other says that they used it to show their power and abiltiy to Soviet Union. Now, no one knows the fact, but I think so.

I will continue to study this problem by reading books that treat the happenings during World War2.

Thank you very much. Why the USA used the atomic bombs is very interesting problem to me. And I would like more Americans to become interested in this issue.

I hope you to continue to see my blog and suggest your advice to me about my poor English.