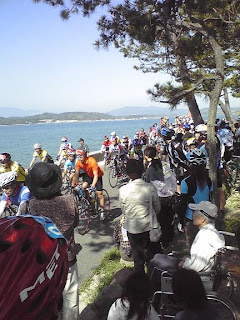 I wanted to run faster than I did last year at "Tour de Kunisaki"（ツールド国東）, but I could not do it. As my excuse, I felt dizzy when I took a short time rest 30 minutes later from start. "Short time" became "long time". And, at the point of about 30km, I felt something wrong in my left leg. So, I rested several times, as its result, it took longer to reach the goal than last year's record.

I was a little bit shocked with this result. Because my friend who took part in this event for the first time run faster than me at about 1 hour short time. I have to re-consider my way of bike training to take part in the next year's event.

From that day's evening to next day's morning, we stayed at a B&B style accommodation in rural area in Ooita prefecture run by a couple. This was a good experience to us.

We heard listen to the host family's stories while eating dinner with several alchohole and dirnking alcohol. He was a retired business man who once worked hard in city area. He started this local life about 6 years ago when he ended his business man life. Now, he acts as an ecologist in several areas.

She also looked to enjoy this local life. She was born in Tokyo and spent almost her life in city area untill they came there. I was impressed with her ability to adjust herself to local community. It depends on her good and bright character, I think.

Next day's morning, he explained to us about some ecological devices that the building has. They has equipped it with "the OM solar system" that uses solar power to warm the building and water. And the building has a good stove (below photo) that burns firewoods. He said that they can keep temperature in the building about 23degrees Celsius in winter. He also explained their outdoor's devices to us . He grows some vegetables and "shiitake"（椎茸）(a kind of mushroom) in organic way, and experiments whether a compost using a cardboard box is useful or not.

Their life in local area gave us a chance to re-consider our now life and future's life. 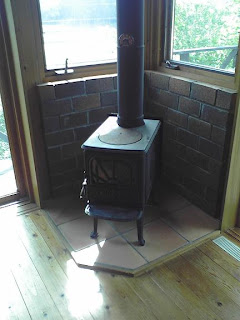 I'm sorry to hear that you didn't do as well in the race as you wanted to. But there's always next time, right?

I have one question regarding this sentence: "We heard the host family's stories eating dinner with several alchohole." I'm not sure if it's what you meant to say, but it sounds like you're saying that you ate with alcoholics (へビードリンカー). Did you mean something more like 色々な種類のお酒? If so, then I think "...eating dinner and drinking several types of alcohol" (or something like that) might sound better. What you do think?

Thank you for your comment.
Yes, I was not confident that I wrote this part well. I wanted to write that "we had a good conversatio with good dishes and some alcohole."

I have corrected this part. It is OK?

Hm. I think this might sound a bit more natural: "We listened to the host family's stories while eating dinner and drinking alcohol." How does that sound to you?