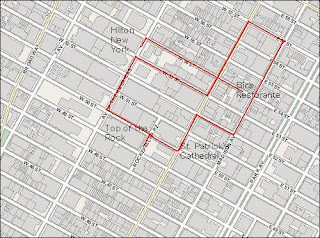 I visited New York city on Dec.21-25 with my wife for sightseeing. The city is wellknown as the center of world-economics, so I had wanted to go there for a long time.

At first, I have to express thanks to many things that include my good health, good relation with my wife, my family's good health, my earnings, my parents, my wife's parents and so on.

We arrived at the JFK airport on Dec.21 after 12hours fright. The economy, cramped seats made us very tired. We expected that immigration inspection was very severe so it would take a lot of time. But it was easier than we thought. A JTB guide took us to the Hilton New York Hotel. On our way, we first saw the tall buildings of Manhattan on the Queensboro Bridge. We arrived at the hotel at about 1pm.

After a short rest in the hotel's room, we walked around nearby area. First, we ate Turkey pizzas sold on a pedestrian because we had a little appetite. It costed five dollars each, and was not bad.

We went to the Rockefeller center and saw a famous Christmas tree and ice rink. This area was very crowded with a lot of people who came from many countries. The skating rink was smaller than I thought. And there was the "Penny Harvest". But I could not understand the usage of the paper bags that was placed near the harvest.

We climbed the Rockefeller center's view point, named "the Top of Rock". We could see the Empire State Building, the Chrysler Building, the Central Park. I felt that I was in a dream.

After that, we went to the fifth avenue where a lot of brand-shops locate. But, we did not buy anything there. In the Tiffany shop, an American crew talked to me in good Japanese, so we were a little bit surprised. And, we entered St. Patrick Cathedral and saw some people praying. But any event was not held there.

We went to the Rockefeller center again, and back to our hotel.

After taking a short rest, we took a dinner at an Italian restaurant, "Bice Ristorante" that locates on 54st. between the fifth ave. and the Madison ave. We asked a waiter to divide one dish into two because we were afraid that the amount of each dish was very much. He willingly accepted our orders. The antipasto was Mozzarella cheese on sliced tomato, and the first dish was pasta of farfalle with cram-chowder,and the second was chicken cooked like Milan-style with potato and spinach. Every dishes were good, but, in spite of divided dishes, the amount was too much, so my wife left a part of the second dish. "Mottai-nai!"

What a magnificent view!!!! And what a wonderful city!
The photos of the ice-rink (I am not sure if I am wrong about this word) are so nice. And so the theatre!

Wow, what a nice trip. I went to New York once when I was about eight or nine years old, but I barely remember it at all. You probably know New York better than I do now.

Well, I guess portions (of food) in America are actually that big, huh? I wonder if I'll be surprised at the amount of food in restaurants once I get back home.

You did a fantastic job on your post. Very nice English! And the photos are nice too, especially the shot of the entire city!

I am glad that you enjoyed the pictures. And I hope you will read the next archive about NYC on my blog.

I am very glad to hear your praise for my poor English from you. I will write a next archive about NYC, please see it again.