guide for a Taiwanese 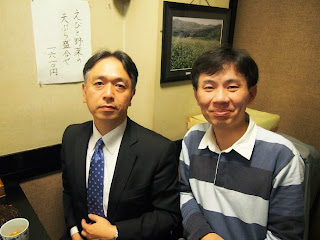 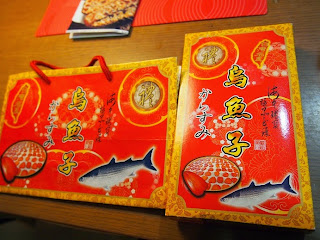 On Nov.12, I had a little bit international experience. He is a Taiwanese man who has travel with his bike for 10 days in the northern part of Kyushu.  He came to Kitakyushu at 6:30 pm from Fukuoka after he stayed for his first two days in Japan.

At first I took him to a "soba" restaurant named "Shiraisi"（しらいし）. We ate "Tempura-soba"that is a set of "soba" and "tempura". Tempura were mainly "anago"（アナゴ）, but including an ingredient, rarely used for tempura, a fig. Later, we went to a hotel that is the highest building in the area to see the night view of the city.

We communicated each other by using English. Occasionally, our conversation did not go well, but we could understand something we meant by writing some "kanji".

I have already learned that there are some internal issues in Taiwan, but I was glad do hear about them directly from a native.

He gave me a "karasumi" as a souvenir. It is a dried mullet roe that is s special product in his province where is the southern part of Taiwan. And it is a very expensive food in Japan. "Thank you very much".
投稿者 bikenglish 時刻: 4:08 AM

Wow, it sounds like you had a great time with him. It's good that we have the opportunity to make friends across borders like this in our modern world.

Thank you so much for the guidance and hospitality.

Before my personal cycling trip to Japan, I didn't know much about the road and traffic condition. Without your kindly help, I would never have had enough courage to go cycling alone in Japan.

In addition to the warmth and hospitality, the treat of traditional Japanese "soba" gave me an exotic cultural experience.