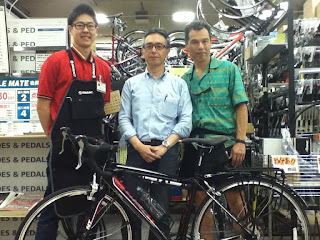 I belong to an organization that helps foreigners to ride a bike in Japan. I guided foreigners who visited my area with their bikes in the past several years.

This time, I met an American man who had a plan to ride a bike in Japan. The main purpose of his visit to Japan is to meet with his relatives. He is a Japanese-American.

His request was to help him to buy a bike at a store. Last Sunday, I took him the store that locates near the "JR Space World" station in Yahata-Higashi ward in City of Kitakyushu. Finally, he could get a bike arranged for his needs.

I hope that he enjoys bike trip in Japan.

What a nice organization that is! I'm sure that he appreciated your help. I'm looking forward to bike-riding in Japan again before too long.

I am sorry that I have read a new article on your blog. I think that you are busy because of preparing for new life in Japan.

Thanks for the thought. Actually, I was waiting for the official graduation announcement from my school, but it's taking longer than I expected, so I might not wait much longer.